Home / International / Ga. secretary of state says fellow Republicans are pressuring him to find ways to exclude ballots ‘There will be a recount in Georgia,’ state official says

Ga. secretary of state says fellow Republicans are pressuring him to find ways to exclude ballots ‘There will be a recount in Georgia,’ state official says 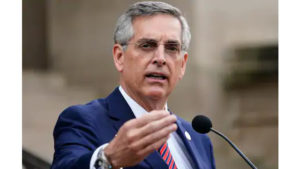 Georgia Secretary of State Brad Raffensperger said Monday that he has come under increasing pressure in recent days from fellow Republicans, including Sen. Lindsey O. Graham (S.C.), who he said questioned the validity of legally cast absentee ballots, in an effort to reverse President Trump’s narrow loss in the state.

In a wide-ranging interview about the election, Raffensperger expressed exasperation over a string of baseless allegations coming from Trump and his allies about the integrity of the Georgia results, including claims that Dominion Voting Systems, the Colorado-based manufacturer of Georgia’s voting machines, is a “leftist” company with ties to Venezuela that engineered thousands of Trump votes to be left out of the count.

The atmosphere has grown so contentious, Raffensperger said, that he and his wife, Tricia, have received death threats in recent days, including a text to him that read: “You better not botch this recount. Your life depends on it.”

“Other than getting you angry, it’s also very disillusioning,” Raffensperger said of the threats, “particularly when it comes from people on my side of the aisle. Everyone that is working on this needs to elevate their speech. We need to be thoughtful and careful about what we say.” He said he reported the threats to state authorities.

The pressure on Raffensperger, who has bucked his party in defending the state’s voting process, comes as Georgia is in the midst of a laborious hand recount of about 5 million ballots. President-elect Joe Biden has a 14,000-vote lead in the initial count.

The normally mild-mannered Raffensperger saved his harshest language for Rep. Douglas A. Collins (R-Ga.), who is leading the president’s efforts in Georgia and whom Raffensperger called a “liar” and a “charlatan.”

Collins has questioned Raffensperger’s handling of the vote and accused him of capitulating to Democrats by not backing allegations of voter fraud more strongly.

Raffensperger has said that every accusation of fraud will be thoroughly investigated, but that there is currently no credible evidence that fraud occurred on a broad enough scale to affect the outcome of the election.

The recount, Raffensperger said in the interview Monday, will “affirm” the results of the initial count. He said the hand-counted audit that began last week will also prove the accuracy of the Dominion machines; some counties have already reported that their hand recounts exactly match the machine tallies previously reported. Election officials in one county, Floyd, discovered about 2,600 eligible votes that were not included in the initial tallies because of a failure to upload them off a memory stick. The secretary of state’s office said those votes probably would have been discovered, but it called for the resignation of the county election director.

“I’m an engineer. We look at numbers. We look at hard data,” Raffensperger said. “I can’t help it that a failed candidate like Collins is running around lying to everyone. He’s a liar.”

A spokeswoman for Collins replied to a request for comment by linking to a tweet Collins sent on Monday in which he described Raffensperger’s “incompetence as Secretary of State.”

Collins ran unsuccessfully for Senate this year and is blamed by some Republicans for pushing the incumbent in that race, fellow Republican Sen. Kelly Loeffler, into a runoff against the Rev. Raphael Warnock, a Democrat.

In the interview, Raffensperger also said he spoke on Friday to Graham, the chairman of the Senate Judiciary Committee, who has echoed Trump’s unfounded claims about voting irregularities.

Raffensperger said he was stunned that Graham appeared to suggest that he find a way to toss legally cast ballots. Absent court intervention, Raffensperger doesn’t have the power to do what Graham suggested because counties administer elections in Georgia.

“It sure looked like he was wanting to go down that road,” Raffensperger said.

In an interview on Capitol Hill on Monday evening, Graham denied that he had suggested that Raffensperger toss legal ballots, calling that characterization “ridiculous.”

But he said he did seek out the secretary of state to understand the state’s signature-matching requirements. Graham said he contacted Raffensperger on his own and was not asked to do so by Trump.

“The main issue for me is: How do you protect the integrity of mail-in voting, and how does signature verification work?” he said.

“If he feels threatened by that conversation, he’s got a problem,” Graham added. “I actually thought it was a good conversation.”

On the same day that Graham spoke to Raffensperger about signature matching, a lawsuit was filed in federal court in Georgia challenging the way county election officials check signatures and allow voters a chance to fix ballots with errors.

The suit, filed by Atlanta lawyer and Trump supporter Lin Wood, seeks to block certification of Georgia’s election until all ballot envelopes are inspected.

Also that day, Trump tweeted about signature-matching in Georgia and criticized Raffensperger for his management of the state elections: “Georgia Secretary of State, a so-called Republican (RINO), won’t let the people checking the ballots see the signatures for fraud. Why? Without this the whole process is very unfair and close to meaningless. Everyone knows that we won the state.”

Raffensperger said he will vigorously fight the lawsuit, which would require the matching of ballot envelopes with ballots — potentially exposing individual voters’ choices.

“It doesn’t matter what political party or which campaign does that,” Raffensperger said. “The secrecy of the vote is sacred.”

The secretary of state also warned that the Republican attacks on Dominion voting machines could create issues for the state’s Republican U.S. senators, Loeffler and David Perdue, who face runoffs on Jan. 5 that will be administered using the same Dominion machines.

Over the weekend, social media posts began appearing from Trump supporters questioning whether they feel comfortable using Dominion machines in the two runoff elections, which will determine which party controls the Senate.

“I don’t think it’s helpful when you create doubt in the election process,” Raffensperger said. “People might throw up their arms and say, ‘Why vote?’ ”