Full Court to decide on fresh evidence in Kartel appeal 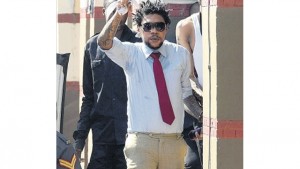 The Full Court of the Supreme Court is to hear an application for a photocopy of a statement to be admitted in the appeal for incarcerated entertainer Vybz Kartel and his three co-accused.

Defence attorney Bert Samuels, who is representing Shawn “Shawn Storm” Campbell, said that submissions were made yesterday in the Court of Appeal for the copy of the eyewitness statement to be accepted as part of the fresh evidence, but that the judge ruled the issue was a matter for a three-judge court to decide.

“We got a photocopy; it has a lot in it… and in that statement certain things are said, which if this court accepts it, it will have an impeachment on the credit of the sole eyewitness,” Samuels said, following the in-camera case management hearing, which involved other noted attorneys Tom Tavares-Finson and Oswest Senior Smith.

Samuels also claimed that an injustice was done to his client because his previous lawyer was unable to argue certain grounds and confront the witness because the prosecution said it lost the original statement.

“Mr (Michael) Lorne, Campbell’s lawyer, tried to use the photocopy, was waiting on the prosecution to find the original. They have not yet found it; they said it was lost by the previous council who unfortunately died and they can’t find the original statement,” he said.

Samuels said the prosecution should have allowed counsel to use the photocopy.

Vybz Kartel, whose given name Adidja Palmer, and his co-accused Campbell, Kahira St Jones, and Andre St John, were convicted in 2014 for the murder of Clive “Lizard” Williams and given life sentences.

The convicts were granted leave to appeal their murder conviction after citing several reasons, including claims that they did not receive a fair trial and that justice was miscarried in their cases, as well as that the trial judge, Justice Lennox Campbell, had erred in admitting contaminated cellphone evidence and that there was more than reasonable doubt about the phone’s integrity.