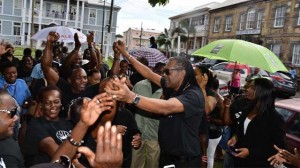 On Good Morning St Kitts and Nevis on Thursday host Maurice Flanders spoke to founder and CEO of Freedom Fm Juni Liburd, who gave an update on what was to take place in the high court on Thursday. He thanked the loyal freedom family for prayers and support.

Dr drew the special guest on the program also spoke to the law suits. Drew the St Kitts Nevis Labour Party candidate for Constituency #8, indicated that Freedom had opened its doors to persons of all political sides. He contended that the law suits were indicative of a pathetic ploy in an effort to muzzle Freedom Fm specifically and by extension the media and democracy.

Hundreds of freedom family supporters came out in a show of solidarity against the on going threat to stifle freedom of the press. Supports were all dress in black wearing black t shirts with the powerful words let freedom reign. At 8:45am marchers proceeded east along Cayon street turn on to West Independence Square Street all the while passionately chanting “Let Freedom Reign.”

After the court proceedings Juni Liburd explained the out come of Thursday’s sitting.