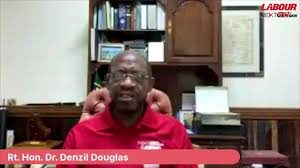 Political leader of the St. Kitts-Nevis Labour Party, Dr. Denzil Douglas, is predicting a victory in upcoming general elections in Saint Kitts and Nevis for the NextGen SKN team. Speaking to FreedomFM’s news desk on Monday, 18th May, Dr. Douglas said the SKNLP is ready for the elections. I asked Dr. Douglas what is the state of readiness of his party.

He said, “The SKNLP NextGen SKN is in a state of readiness and we are on high alert. We are fully mobilized. You would recall that as early as March, one of the biggest meetings that we’ve had for this entire period in Fig Tree Sandy Point, thousands of people were standing in front of us and logged on the internet. It showed the crowd, the people, the citizens that the party was fully mobilized from since that day… We had, of course the interruption of CoVID-19… but we immediately moved our campaign from a physical one to a virtual one and it has been surprisingly very successful.”

FreedomFM also asked Dr. Douglas that given the State of Emergency regulations and the continued closure of our borders, thus disallowing the overseas voters, if this would affect the SKNLP chances in any significant way.

“We believe that the Labour Party has its strength on the ground and it may have some support overseas. Of course, we would have liked our people who are overseas, who have been waiting this long, we would have liked them to participate. But if it is the wish that they be prevented from coming by programmes, by schedules, by protocols htat have been established precisely to do that, we would be able to use what we have  here in St. Kitts and Nevis and win the election for the benefit of all of the people.”