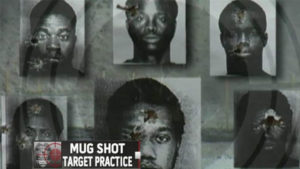 A South Florida family is outraged at North Miami Beach Police after mug shots of African American men were used as targets at a shooting range for police training.

It was an ordinary Saturday morning last month when Sgt. Valerie Deant arrived at the shooting range in Medley, or so she thought.

Deant, who plays clarinet with the Florida Army National Guard’s 13th Army Band, and her fellow soldiers were at the shooting range for their annual weapons qualifications training.

What the soldiers discovered when they entered the range made them angry: mug shots of African American men apparently used as targets by North Miami Beach Police snipers, who had used the range before the Guardsmen.

Even more startling for Deant, one of the images was her brother. It was Woody Deant’s mug shot that taken 15 years ago, after he was arrested in connection to a drag race in 2000 that left two people dead. His mug shot was among the pictures of five minorities used as targets by North Miami Beach police, all of them riddled by bullets.
“I was like ‘why is my brother being used for target practice?’” Deant asked.

Deant’s fellow guardsmen were angry too, but they tried to console Deant, who was devastated.

“There were like gunshots there,” Deant said. “And I cried a couple of times.”

She immediately called her brother, Woody Deant, who was 18 years old when the picture was taken.

“The picture actually has like bullet holes,” Woody Deant said. “One in my forehead and one in my eye. …I was speechless,” he added.

The City of Medley owns the Medley Firearms Training Center and it leases the facilities to law enforcement agencies in the area. The shooting range staff doesn’t select the targets use by law enforcement and the military.

He noted that the sniper team includes minority officers. Dennis defended the department’s use of actual photographs and says the technique is widely used and the pictures are vital for facial recognition drills. But the Deant family questions why officers were firing targets with images of real people, in this case African-Americans, especially at a time when relations between minority communities and law enforcement are so tense.

“Our policies were not violated,” Dennis said. “There is no discipline forthcoming from the individuals who were involved with this.”

“The use of those targets doesn’t seem correct,” Alex Vasquez, a retired FBI agent, said. “The police have different options for targets. I think the police have to be extra careful and sensitive to some issues that might be raised.”

Dennis said the police department uses an array of pictures including that of whites, and Hispanic males. What concerns his police department, he said, is that the picture was from someone that happened to be arrested by his agency.

“That individual would be someone that was on the streets of North Miami Beach,” Dennis said.

The police chief said his department will resume use of human image targets after it expands the number of images in its inventory. His officers, Dennis said, will not use any booking photos from suspects they have arrested and he’ll direct his officers to remove the targets after they use the shooting range.
But Woody Deant, who did four years in prison after his 2000 arrest, expressed outrage.

“Now I’m being used as a target?” said Woody Deant. “I’m not even living that life according to how they portrayed me as. I’m a father. I’m a husband. I’m a career man. I work 9-to-5.”

The Deants contacted Attorney Andell Brown. He said he finds the use of human images for target practice extremely disturbing.

“This can create a very dangerous situation,” Brown said. “And it has been ingrained in your subconscious what does that mean when someone [police] comes across Woody or another person on the street and their decision-making process on using deadly force or not.”