Florida, Missouri and Texas now account for 40% of new coronavirus cases in U.S. 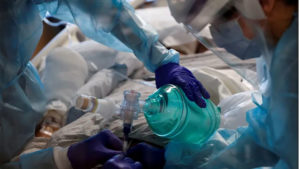 Just three states are now driving the pandemic in the United States, as the divide between vaccinated and unvaccinated regions of the country becomes ever more stark, as the more transmissible Delta variant of the coronavirus spreads.

Forty percent of all new cases this week have been recorded in Florida, Texas and Missouri, White House pandemic response coordinator Jeff Zients revealed at a press briefing Thursday.

Florida alone accounts for 20 percent of all new cases nationally, Zients pointed out, a trend that has stretched into its second week.

Zients added that “virtually all” hospitalizations and deaths — a full 97 percent — are among unvaccinated people. “The threat is now predominantly only to the unvaccinated,” he said. A few vaccinated people do experience so-called breakthrough infections, but they tend to experience only mild COVID-19 illness, or no illness at all.

Encouragingly, Zients said the five states that have experienced the most significant rise in infections — Arkansas, Louisiana, Florida, Nevada and Missouri — all also saw vaccination rates beat the national average for a second week in a row. But because immunity takes two weeks to develop, and the Delta variant spreads so rapidly, the benefits of the increased uptake of vaccinations may not be evident right away.

Singling out the three states where infections are now spiking could have the effect of putting pressure on elected officials there to do more to encourage vaccinations.

Florida’s governor, Ron DeSantis, is a Donald Trump loyalist who is widely expected to seek the presidency in 2024. His handling of the pandemic is coming under new scrutiny with the recent rise in cases.

Gov. Greg Abbott of Texas, also a GOP presidential aspirant, has recently said he will not impose new mask mandates. Both he and DeSantis have also signed measures striking down requirements that people produce proof of vaccination.

As the pandemic has surged back in parts of the country, other Republicans have deviated from that approach. The governor of Arkansas, Asa Hutchinson — a Republican who, like DeSantis and Abbott, is rumored to have presidential ambitions of his own — has recently pushed for more vaccinations in his state.

Rep. Steve Scalise, a member of Republican leadership in the House of Representatives and a close Trump ally, rolled up his sleeve last Sunday and was vaccinated. Scalise represents a district in Louisiana, another state with a low rate of vaccination that is experiencing a surge in new cases.

There were 46,318 new cases of the coronavirus reported nationwide on Tuesday, Centers for Disease Control and Prevention Director Rochelle Walensky said at Thursday’s briefing. That is a marked increase from the lows of late May and early June. Hospitalizations and deaths are also rising, after plummeting earlier this summer.

“If you are not vaccinated,” Walensky said, “please take the Delta variant seriously.”