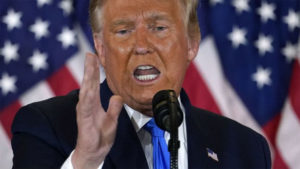 U.S. District Judge Aileen Cannon, after being rebuked by a federal appellate court for allowing Trump’s lawsuit to move forward, brought his controversial lawsuit to a halt after the court had ordered her to end it.

“This case is dismissed for lack of jurisdiction,” Cannon wrote in a one-page order released Monday. “The Clerk of Court shall close this case.”

At the beginning of the month, the 11th Circuit Court of Appeals in Atlanta ruled that Cannon had no authority to grant Trump’s request for an independent expert to evaluate thousands of documents that FBI agents took from his Mar-a-Lago residence on Aug. 8 to determine if any were off limits to the feds because of potential attorney- or executive-privilege protections.

The special master, a federal judge in New York, was supposed to report back to Cannon soon with his assessment of the documents as the Justice Department continued its probe of the classified documents that Trump took from the White House to his Palm Beach estate after losing the presidency in 2020. Trump is under investigation by a federal grand jury in Washington, D.C., which is considering allegations of mishandling classified government documents, violating national security laws and obstructing justice.

But a three-judge panel of the 11th Circuit Court threw out her Sept. 5 order allowing the special master to review the seized documents for potential privilege issues. The panel found that Cannon, who was nominated by Trump to the federal bench, had no authority to appoint the independent expert or even get involved in the former president’s suit after a West Palm Beach magistrate judge had properly approved a lawful warrant for the FBI’s search of Mar-a-Lago.

The Dec. 1 ruling overturning Cannon’s decision was blistering and came from three judges who were also Republican-appointed, two of them also by Trump.

In a 21-page opinion, the judges — Chief Judge William H. Pryor, Britt Grant and Andrew L. Brasher — described the Trump legal team’s arguments as a “sideshow,” highlighting that his lawyers never made the fundamental point that FBI agents showed a “callous disregard” for the former president’s constitutional rights. The appellate panel found that the “callous disregard standard has not been met here, and no one argues otherwise” — including the presiding judge, Cannon.

“There is no record evidence that the government exceeded the scope of the warrant — which, it bears repeating, was authorized by a magistrate judge’s finding of probable cause [of a crime],” the panel wrote. “And yet again, [Trump’s] argument would apply universally; presumably any subject of a search warrant would like all of his property back before the government has a chance to use it.”

In her Sept. 5 order, Cannon noted that she agreed with Justice Department lawyers that FBI agents carrying a search warrant for Trump’s Mar-a-Lago estate had not shown a “callous disregard for [his] constitutional rights,” concluding that “this factor cuts against the exercise of equitable jurisdiction.”

But rather than follow her own analysis, Cannon extended Trump protections not provided to ordinary citizens by appointing the special master to review the FBI’s evidence, citing the “unprecedented circumstances” of the U.S. government raiding a former president’s home.

Cannon assumed jurisdiction in the Justice Department’s investigation by appointing New York federal judge Raymond Dearie to view about 100 classified records and thousands of other personal and presidential records taken from Trump’s home and private club to determine if any contained privileged correspondence with lawyers. Cannon refused to let a Justice Department “filter team” of agents and prosecutors do the job.

Read More: Trump wanted a special master. So did a businessman. The judge treated them differently

Jon Sale, a prominent white-collar defense lawyer in Miami who had been asked by Trump to represent him in the Mar-a-Lago documents case, said the appellate court’s message was unambiguous.

“The court’s ruling makes it clear that no person who is the subject of a search warrant, including a former president, is above the law,” said Sale, who served as a Watergate federal prosecutor during the Nixon administration scandal.

But he added: “At the same time, under our Constitution, all people who are the subjects of search warrants, including former presidents, are presumed innocent during the course of the investigation.