Home / International / First Ebola victim may have been infected by bats

First Ebola victim may have been infected by bats 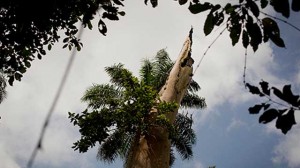 NEW YORK, United States (AP) — A team of researchers think they may have pinpointed how the Ebola epidemic in West Africa started with a small boy playing in a hollowed-out tree where infected bats lived.

The researchers explored an area in southeastern Guinea where 2-year-old Emile Ouamouno fell ill a year ago and died. Health officials believe he was the first case in the epidemic, which wasn’t recognized until spring.

The Ebola virus wasn’t found in the bats they tested so they weren’t able to prove the source, the scientists reported in a study published Tuesday. But they believe the boy got Ebola from the furry, winged creatures that had lived in the hollow tree.

“As a scientist, I can say it’s a possible scenario,” said one of the study’s authors, Fabian Leendertz of the Robert Koch Institute in Berlin.

An outside expert said the researchers’ work was thought-provoking. “They didn’t find smoking guns” but perhaps broadened the thinking about what sparked the epidemic, said Stephen Morse, a Columbia University infectious disease expert.

The Ebola epidemic is the worst in world history, blamed for killing nearly 8,000 people across West Africa this year, mostly in Guinea, Liberia and Sierra Leone.

The epidemic’s exact origin has never been determined, but the virus is thought to spread to people from some sort of animal. Many experts have suspected some species of fruit bat, though some wonder if West Africa’s epidemic started through another animal — like a chimpanzee or small antelope — that was perhaps infected by bats and then eaten by people.

The researchers saw no signs that Ebola had affected larger animals around the boy’s small village of Meliandou. But they learned that a large colony of small, smelly bats with long tails lived in a hollow

tree near the boy’s home.

Villagers told the researchers that the tree caught fire in March, causing a “rain of bats” to pour out of the tree. The bats were destroyed or gone before the researchers arrived in mid-April — a bad

break for the researchers, Leendertz said.

The researchers tested 169 bats, including fruit bats and a few from the species that lived in the tree. None tested positive for Ebola, but that doesn’t disprove the hypothesis because experts think the virus may

dwell in only a small minority of bats. The researchers are trying to collect more of the bats for testing.

The study was published Tuesday in EMBO Molecular Medicine.

Also on Tuesday, Liberia’s government announced it will allow families to bury Ebola victims in a special plot of land instead of requiring that the bodies be cremated so as not to spread the virus.

More than 2,000 suspected Ebola victims have been cremated since the cremation decree was ordered at the height of the crisis in Liberia several months ago.

The corpses of Ebola victims are highly contagious, and many of those who washed or touched bodies before the burials contracted the disease.

The cremation decree is highly unpopular in Liberia, where funeral traditions are carefully followed and are considered a sacred obligation to the deceased.