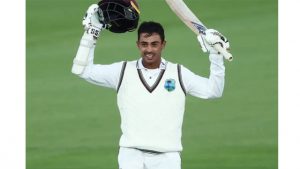 Opener Tagenarine Chanderpaul scored a fine First-class century against Australia Prime Minister’s XI on day two of the pink-ball Four-day warm-up match. The 26-year-old Guyanese made his sixth First-Class century while the West Indies reply to the Aussie’s PM XI 322 all out.

Chanderpaul’s responsible innings of 119, included 293 balls and 13 fours, with one six. Only captain Kraigg Brathwaite was the other West Indies batsman to offer resistance with 47. He faced 98 balls and hit seven boundaries while featuring in a 94-run opening stand with Chanderpaul in Canberra, Australia.

Son of a gun Tagenarine Chanderpaul has boosted his chances of a Test debut against Australia by producing a hard-fought century against the Prime Minister’s XI.

Chanderpaul, the son of West Indies great Shivnarine Chanderpaul, scored 119 off 293 balls on Thursday to lift his side to 234 for 7 at stumps on day two of the pink-ball match in Canberra.

The PM’s XI made 322 in their first innings, leaving the four-day clash delicately balanced.

Chanderpaul was the second-highest run-scorer in West Indies first-class cricket this year, averaging 73.16 while also starring for the country’s A team.

The 26-year-old’s knock against the PM’s XI has put his name up in lights ahead of the first Test against Australia at Perth’s Optus Stadium, starting November 30. Even before the tour match began, West Indies captain Kraigg Brathwaite backed Chanderpaul to succeed at Test level.

The PM’s XI added a further 25 runs to their overnight score of 297 for 9 before Mark Steketee was last man out for 15. Paceman Alzarri Joseph was the pick of the touring bowlers with 4 for 65, while spinner Roston Chase finished with 2 for 72.

The tourists made a bright start to their innings, moving to 94 without loss following strong efforts from Chanderpaul and Brathwaite. But when Brathwaite chopped on a Steketee delivery, it sparked a collapse of 4 for 44 as West Indies began to wobble.

WA paceman Joel Paris found the edge of Nkrumah Bonner’s bat to send him packing for a duck before spinner Todd Murphy bowled Devon Thomas and then trapped Kyle Mayers eight overs later. Chanderpaul held the innings together, striking 13 fours and one six on the way to posting triple figures. (ESPN Cricinfo)