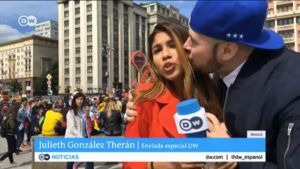 However, right as she went live on television for her report, a man came running up into the shot. The man grabbed Gonzalez Theran and her breast, kissed her on the cheek, and quickly took off.

Gonzalez Theran, though, didn’t let the attack faze her one bit. She impressively continued right on with her report as if nothing had happened — even while the man was groping her.

“We do not deserve this treatment,” Gonzalez Theran posted on Instagram with the video of her report shortly after the incident. “We are equally valuable and professionals. I share the joy of football, but we must identify the limits of affection and harassment.”

The man has yet to be identified.

“I had been at the scene for two hours to prepare for the broadcast and there had been no interruptions,” Gonzalez Theran said. “When we went live, this fan took advantage of the situation. But afterwards, when I checked to see if he was still there, he was gone.”

Gonzalez Theran and Bibiana Steinhaus — who is Germany’s first female referee in the Bundesliga — quickly condemned the man’s actions and blamed the “macho-dominated sports culture,” according to Deutsche Welle.

Gonzalez Theran isn’t just there to “bring some color to the picture,” she said, but to “talk about systems and strategy” on the field, too.

“I feel for her, because this type of attack has happened several times in the past,” Steinhaus told Deutsche Welle. “Don’t kid yourself that similar misogynist things do not happen.”