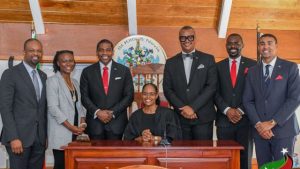 Prime Minister the Honourable Dr. Terrance Drew led the Members of Cabinet, as well as the Speaker and the Clerk of the Federal National Assembly to Nevis, for the Opening of the New Session of the Nevis Island Assembly. This occurrence is undoubtedly the first time in history, as it is in keeping with Prime Minister Dr. Drew’s mandate to bridge the divide between both islands.

“It is important that the Cabinet would have come and shown its support to the democracy here in the island of Nevis. It also demonstrates our thrust as we continue to work together as a Federal Cabinet with the Nevis Island Administration,” said Dr. Drew. “We think that strong collaboration is a good equation in terms of our overall development as a Federation. So in that sense, it is very significant.”

Dr. Drew said the day’s proceedings went very well. He congratulated all who played a role in ensuring the success of the Opening of the New Session of the Nevis Island Assembly (NIA).

Prime Minister Dr. Drew indicated that the people of Nevis can expect to see an increased presence by the Federal Cabinet going forward, especially as both islands work together to strengthen relations.