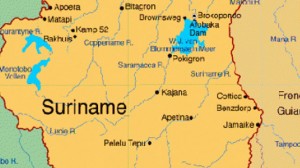 PARAMARIBO – A court has sentenced a man to eight years in jail after he admitted having sex with his child and fathering her two children.

The man, whose full name was not disclosed, was arrested and prosecuted after a neighbour raised the alarm after the daughter had informed her who was the children’s father.

Before she moved to Suriname to live with her father, the girl, who remained unnamed, lived in Guyana. She told investigators that when she arrived here, her father forbid her to have social contact. Being in a strange country, she was totally dependent upon him.

Joshua L. insisted that he had not raped the girl, but that it had been her who seduced him. The prosecutor had demanded 12 years in jail, but Judge Maytrie Kuldipsingh took into consideration that the man had never been in trouble with the law before.

Judge Kuldipsingh scolded him for taking advantage of his daughter and ruining her young life.

She said because of him, the daughter is now a teenage mother of two children.

One child has been sent to live with relatives in Guyana and the other has been given up for adoption. (CMC)