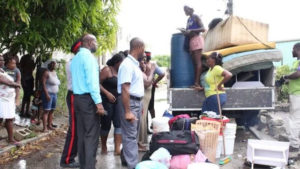 A family of 14, including seven young children, was today evicted from their Evelyn’s Avenue, Bayville, St Michael home today after a court sided with the family’s elderly matriarch.

But amid chaotic scenes and pouring rain, a bitter family drama played out on the street as a mother and daughter feud over ownership and occupancy of the two-storey house.

After failing to comply with a court order to vacate the two-bedroom house by October 24, Allison Adams, 46, who occupies the dwelling with her six children and seven grandchildren, were forced out by police and court marshals. The house had been built by the Urban Development Commission (UDC).

As the family’s belongings were loaded on to a truck, Adams told Barbados TODAY that she was saddened and devastated because they had nowhere to go in a dramatic chapter of an ongoing family dispute.

“And I got a daughter that suffering with cancer and I got two grandchildren with heart problems.

“I don’t want no conflict with my children and them. Them putting my things on a truck but I don’t have anywhere to go.”

But Adams’s mother, Joyce Adams, 71, who lives downstairs, declared she wanted to see the backs of her daughter and grandchildren since she has had “enough of them”.

Joyce Adams showed Barbados TODAY documents which stated that in May 2012, UDC agreed to allocate the house to her for a period of ten years.

But daughter Allison said she took her mother to court to have her name taken off of the documentation as caretaker since the land, which belonged to her deceased great-aunt, was not willed to anyone.

She said: “The will is written up but she died before it was signed.

“Here is supposed to be mine.

“All the papers had to do was to be signed. This was going on for years. I was in court for 25 years for this property here and now urban come and build a house now and she feel that she got ownership.

“But I don’t talk to she, she went to court and tell the magistrate that I is the worst child that she born.

“If she is to keep my children you got to pay her, you got to buy what they want to eat.

“I tried my best to make things work with my mother.”

The elderly woman declared that while the story of her relationship with her daughter was “too much to talk about”, she was tired of continuous disrespect and torment.

Joyce complained her daughter and grandchildren kept the house and surroundings in an unsanitary state.

She also said she was tired of water seeping through the flooring from upstairs and wetting her.

She told Barbados TODAY: “I tired. It is too much.

“I raised them and them want to be [abusing] me, all kind a men going up my stairs, fighting me for my house.

“On a Sunday a lot of dirty water coming down on me.

“You think it is right she put me in court for five years for my house?

“This house ain’t hers. Them young, she [Allison] got children and all of them is women; let the men put them somewhere.”

After being unable to tell officials at the scene where the belongings on the truck would go, the atmosphere heated up as Allison and her children declared that the items would not be going to the dump.

At one point, the situation almost became uncontrollable as the children began pulling baskets of clothing off the trucks. Extra police officers were called in as a senior officer issued a warning to the children to calm down and let the eviction process continue.

Barbados TODAY understands that the items were not dumped.

During the eviction, a 15-minute downpour sent the adults scampering to find shelter with toddlers but not before the children were soaked by the pouring rain.

Allison Adams told Barbados TODAY that she had contacted the constituency office of MP for The City Lieutenant Colonel Jeffrey Bostic seeking assistance for her family.