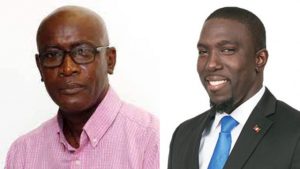 The closest any ABLP candidate had ever come to winning the seat was in the 2018 general elections when Colin ‘Tin Tin’ James lost by just 10 votes.

Although the loss was devasting for James, this time around he is confident that he can create history and dethrone the incumbent Jamale Pringle, the United Progressive Party (UPP) contender.

He further suggested that his body of work in the constituency and the number of years he has dedicated to giving back to the area will get him over the hump this time around.

“Well, obviously, it’s a challenge; it’s a challenge I always embrace and welcome. I know that Mr Pringle is a reasonably formidable candidate and from that point of view, I know I have to work hard to defeat him and that’s what I have been doing for the last four and a-half years,” James told Observer on the sidelines of the ABLP’s campaign launch on December 19.

“I think I done enough ground work to be successful but I am not going to rest on my laurels there is still a lot of work to be done and I am going to make sure I do the hard work, put in the miles, put in the effort, put in the hours and make sure that I can win this seat, for the first time since 1994, for the ABLP. It’s one of the toughest seats for anybody who runs outside of the UPP to win, but I am not daunted by that. I am buoyed by the support that I am receiving from the constituents,” he added.

This will be the third consecutive election that James will be contesting for the ABLP in that area.

Pringle, however, is not convinced that James will defeat him in the January 18, 2023 polls.

He said that although James was not the official representative for the area, his party was in government and had access to resources that the UPP did not, but James has done nothing to improve the conditions in All Saints East & St Luke during the past eight years that the ABLP has been in power.

“When you look at the Callaloo Cay project that they’re boasting about, persons within the community were taken for a ride, so to speak, looking forward to a project that up to date, eight years later has not materialised. When you look at the road conditions in All Saints East & St Luke from 2014 to now, there is no difference with the same person who is vying to become the representative was the person running in this constituency.

“The situation as it comes to infrastructure, as it comes to development in the constituency, is still the same. I don’t have the government but persons would have realised that the genuine interest by Jamale Pringle in that constituency is clearly the main reason why they are going to vote for me a second time,” the incumbent said.

Pringle pointed out that those incidents have told the tale for the constituents, regarding the level of interest his opponent has in the area, and will guarantee his second term.

“Ask the person who said they are confident what is it they have done within the last 10 years. He was a senator with ministerial position in the Ministry of Sports, but yet Swetes Village still doesn’t have a complex that they can play on; I can go and on.

“The clinic in Old Road is in a little post office. I haven’t heard the person that wants to represent the constituency speak on these issues and the main reason I am confident that the people will elect me is because they know I have their interest at heart and I will fight tooth and nail for their benefit.

“It is clear that I am the only choice for All Saints East & St. Luke,” Pringle added.

Observer media also reached out to the Democratic National Alliance (DNA) candidate Avoy Knight for a comment, but he was unable to do so at the time of going to press.

However, our newsroom will report on Knight’s comments when they become available.