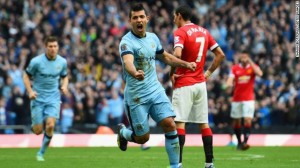 (CNN) — It was a game that featured one of the most expensively assembled casts a Manchester derby has ever seen.

Quite rightly, it was settled by one of the most valuable forwards in world football.

Sergio Aguero’s second half strike was enough to give Manchester City a closely fought 1-0 victory over a Manchester United side that played the majority of this tense match with ten men after Chris Smalling was sent off late in the first period.

The result marks a fourth consecutive derby victory for City and keeps them on the tails of second placed Southampton in the Premier League standings.

“All the games are (worth) three points but it’s important to win the derby,” City manager Manuel Pelligrini told Sky Sports after the match. “It’s a special moment to win against Manchester United.”

Pellegrini’s men have struggled in recent weeks, losing to Newcastle United and West Ham in domestic competitions whilst drawing with CSKA Moscow in the Champions League.

But City showed admirable grit to shut out their cross-town opponents Sunday after coming under real pressure in the closing stages.

“They (United) played well towards the end,” City captain Vincent Kompany said. “We had most of the chances but you miss a couple and you can seem to lose control of the game.

“The derby win is massive. For a minute, the league doesn’t matter. It is a boost for us and we will do our job again in the Champions League on Wednesday.”

If anything, the big spending tag is now more apt for United.

The Red Devils trumped City and all others in the Premier League this close season by splashing out over $239 million on new talent like Angel Di Maria, Radamel Falcao, Luke Shaw, Marcos Rojo, Ander Herrera and Daley Blind to aid new manager Louis Van Gaal’s assault on the title.

City were hardly penny pinchers themselves, however, bringing in the likes of Eliquiam Malanga, Fernando and Willy Caballero at a combined cost of $78 million, but were more restrained in the market than in years gone by.

It was one of the mainstays of the light blues recent triumphs, himself a $60 million signing from Atletico Madrid back in 2011, who would settle this affair.

Aguero looked lively all afternoon, testing David De Gea early on with a rasping strike from a tight angle and then forcing the United keeper into a brave block later in the half.

When Smalling was sent off, after picking up a second booking for a lunging tackle on James Milner that Van Gaal later described as “not very smart,” it looked like the lively Argentine would find more space against United’s depleted back line.

While that didn’t exactly turn out to be the case, as United still created more than their fair share of chances, he was to prove the difference just after the hour mark.

Gael Clichy was expertly played through by Yaya Toure before cutting the ball back for Aguero to sweep the ball high beyond De Gea.

It was a typically smart Aguero goal, displaying nifty movement to step away from his marker to create the space for the pull back.

United reacted by pushing forward despite their numerical disadvantage and came close through efforts from Robin Van Persie and Marouane Fellaini.

City still created chances of their own, however. Jesus Navas cracked the upright after a clever through ball from Toure while Stevan Jovetic made De Gea work after shooting from the edge of the box.

With time running out Wayne Rooney burst through the City defense and claimed to have been brought down by the covering Martin Demichelis. Referee Michael Oliver remained unmoved and when the ball broke to Di Maria, the Argentine’s shot was brilliantly saved low down to his right by Hart.

It was to be the last clear cut chance of the match as City closed out to maintain their local dominance.