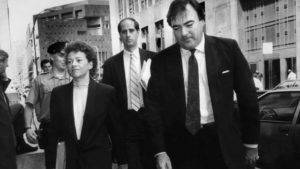 Ms. Lederer was portrayed in the Netflix mini-series “When They See Us” as aggressively prosecuting five black and Latino boys for rape despite doubts about their guilt.

Elizabeth Lederer, the lead prosecutor in the Central Park jogger case, which resulted in the wrongful conviction of five black and Latino boys, said on Wednesday that she would not return as a lecturer at Columbia Law School. Her decision was the latest fallout from a recent Netflix mini-series about the case.

The mini-series, “When They See Us,” created and directed by Ava DuVernay, had renewed demands that the law school fire Ms. Lederer, a part-time lecturer there and a current prosecutor in the Manhattan district attorney’s office. She led the prosecution against the boys, who were accused of brutally raping a white female jogger in the park in 1989. They said the police had coerced them into confessing, and their convictions were overturned more than a decade later.

In an email to Columbia Law students on Wednesday evening, Gillian Lester, the dean of the school, said Ms. Lederer decided not to seek reappointment as a lecturer, writing that the mini-series had “reignited a painful — and vital — national conversation about race, identity, and criminal justice.” The email included a statement from Ms. Lederer saying that she had enjoyed her years teaching at Columbia but would not be returning.

“Given the nature of the recent publicity generated by the Netflix portrayal of the Central Park case,” the statement said, “it is best for me not to renew my teaching application.”

Ms. Lederer and the Manhattan district attorney’s office did not immediately respond to requests for comment on Wednesday night.

The mini-series is a dramatized account based on the experiences of Korey Wise, Kevin Richardson, Raymond Santana, Antron McCray and Yusef Salaam, who are known as the Central Park Five. They were imprisoned for several years before another man, Matias Reyes, confessed in 2002 that he had committed the crime. When their lawsuit against the city was settled for $41 million in 2014 by the administration of Mayor Bill de Blasio, no wrongdoing was admitted on the part of the investigators.

After the mini-series was released last month, there was immediate backlash against Linda Fairstein, who ran the sex crimes division of the district attorney’s office at the time of the case. Ms. Fairstein was portrayed as the driving force behind the prosecution, ignoring evidence that did not validate her belief that the boys were guilty. (She has criticized the mini-series as being “so full of distortions and falsehoods as to be an outright fabrication.”)

Last week, Ms. Fairstein resigned from the boards of several organizations, including Vassar College, her alma mater. Ms. Fairstein, who went on to a successful career as a crime novelist, was also dropped by her publisher.

While Ms. Fairstein’s character is portrayed as being steadfast in her objective to put the boys in prison, Ms. Lederer is shown as having significant doubts about their guilt. But the mini-series depicts her as aggressively prosecuting the boys despite those misgivings.

In 2013, a documentary about the Central Park jogger case galvanized similar calls for Ms. Lederer’s firing as a lecturer. A petition demanding her removal received thousands of signatures, but the school did not take action. (It did remove a mention of the case from Ms. Lederer’s online biography on the law school site.)

A letter from Columbia’s Black Law Students Association, shared online on Tuesday, criticized the school’s leadership for “inaction” on the earlier calls for Ms. Lederer’s removal and demanded anti-racism training for its professors.

“Ava Duvernay’s powerful film has shed light on details of a story some of us know too well,” the letter said. It added, “We ask that Columbia Law School take action with us, and in doing so, demonstrate its commitment to training and educating lawyers who will go on to impact people’s lives and affect their communities.”