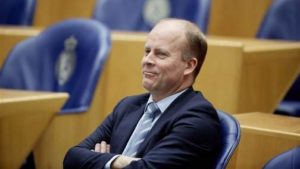 The Dutch government said Monday it will take over the running of one of its Caribbean island municipalities, denouncing “physical neglect” and “lawlessness” on Sint Eustatius.

The island’s ruling council will be immediately dissolved with Dutch Interior Minister Raymond Knops travelling there this week to explain the decision to residents.

“The current administrative situation is one of lawlessness and financial mismanagement,” the interior ministry said.

“Discrimination, intimidation, threats and insults and personal enrichment flourish at the expense of the people of Sint Eustatius,” a statement issued in The Hague said.

Mismanagement “has had a serious effect on the running of the island and the daily lives of the population of Sint Eustatius,” the ministry said, adding “the island has been physically neglected.”

New polls to elect an island council will be held once Sint Eustatius is able to properly run itself.

Administration of the tiny island municipality with just over 3,000 residents, situated in the Leeward Islands chain east of Puerto Rico “has been a source of concern for a while,” the statement said.

“Previous measures to improve the situation have failed,” it added, pointing to a report by a two-person commission set up in May to investigate.

The commission recommended an intervention by the Dutch government, a move supported by the Dutch State Council — The Netherlands’ highest court which also advises the government on state matters.

But the commission also slapped the Dutch government, saying it had allowed relations to deteriorate, while projects to improve roads, water supply, homes and waste disposal had dragged.

The move comes less than a month before the Dutch part of the nearby island of Saint Martin is to hold new elections after a row with The Netherlands over aid in the wake of Hurricane Irma forced a previous premier to resign.

Irma barrelled through the eastern Caribbean destroying swathes of Sint Maarten, as it is called in Dutch, as well as Sint Eustatius, Bonaire and Saba.

Sint Eustatius, together with islands of Bonaire and Saba form “special municipalities” within the Kingdom of the Netherlands which is responsible for its public administration.