Duminy out of Windies contest 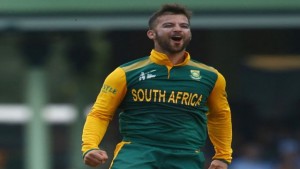 JP Duminy picked up an injury during South Africa’s 37-run victory over Afghanistan in Mumbai.

NAGPUR, India (CMC) – West Indies will not have to worry about the threat posed by JP Duminy after the left-hander was ruled out of Friday’s contest with a left hamstring injury.

Duminy, South Africa’s highest run-getter in Twenty20 Internationals and a tidy left-arm spinner, picked up the injury during the 37-run victory over Afghanistan in Mumbai last Sunday.

Duminy made an unbeaten 29 as South Africa rattled up 209 for five but scans following the encounter at the Wankhede revealed the extent of the damage.

“The scans which were done yesterday confirmed our clinical suspicion of a hamstring strain which means that he will be ruled out of Friday’s game,” South Africa’s team manager, Dr Mohammed Moosajee said.

“The plan is to try and get him ready for our last round-robin match against Sri Lanka in Delhi on Sunday. Our physiotherapist, Brandon Jackson, has already started with treatment and rehab and for now we will have to wait and see how he responds to the plan.”

With Duminy ruled out, South Africa are mulling over the inclusion of Aaron Phangiso, to provide the left-arm spin.

However, the move would leave the Proteas short with the bat in what will be crucial game, following their shock loss to England in their opening game.

West Indies are the only unbeaten side in Group 1, having won both their games to date against England and Sri Lanka.