Home / Sports / Draymond Green on Steph Curry and Klay Thompson: “F*ck Them Jump Shots. They Show Up in Big Moments’

Draymond Green on Steph Curry and Klay Thompson: “F*ck Them Jump Shots. They Show Up in Big Moments’ 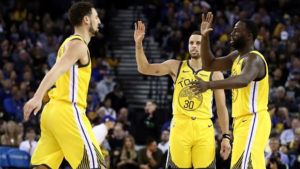 Draymond Green is over people characterizing Klay Thompson and Steph Curry as soft. After the pair stepped up to put away the Houston Rockets without an injured Kevin Durant, Green went on a rant in defense of his teammates’ toughness.

Green said he thinks the misconception comes down to the pair’s pretty shooting and the fact that they are both light-skinned. He’s tired of hearing it.

“They’re light-skinned and they’re soft. Fuck outta here. They ain’t never folded in a big moment. But they don’t get credit for that because their jump shots are pretty,” he said. “Fuck them jump shots. They show up in big moments. They got heart.”

Green, Curry, and Thompson have made up the core of the Warriors’ current dynasty. The team bested LeBron James’ Cavaliers in 2015 and have returned to the Finals every year since. They only lost once, in 2016, after which they picked up KD and became the current behemoths.

The Warriors will get yet another chance to prove they are the best team in the league coming up against either the Blazers or the Nuggets.