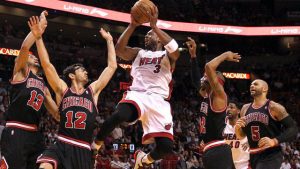 CHICAGO — Goran Dragic and the Miami Heat followed the lowest-scoring first quarter in team history with the highest-scoring one of the season to beat the Chicago Bulls.

Jerian Grant led Chicago with a career-high 24 points. Denzel Valentine had 14 points and career highs of 13 rebounds and seven assists.

“They (the bench) inspired the whole team,” Heat coach Erik Spoelstra said. “We were looking for some kind of energy, some kind of separation. We understand that it was going to be a 48-minute game and they played some inspiring basketball, not only in the fourth quarter but in that second quarter. That’s what really changed the momentum and brought us back into it.”

Ellington ignited the Heat after the 2-for-19 first-quarter from the field, scoring 10 points and hitting three 3-pointers as Miami shot 68.4 percent in the second quarter.

The Heat started slow again in the third quarter, prompting Spoelstra to leave his second- and third-leading scorers, Dion Waiters (four points) and Hassan Whiteside (11 points, nine rebounds), on the bench down the stretch as the Heat pulled away after Chicago cut Miami’s lead to 83-81 with five minutes, 40 seconds to play.

“I don’t think we look at it like Dion or Whiteside or Dragic,” James Johnson said. “We have a lot of weapons on this team. We have a lot of guys who could do it. We’re all trying to play our roles and master that.”

Justin Holliday added 15 points for the Bulls, who lost their fifth in a row following an 0-4 West Coast trip.

Heat: Whiteside (knee) was in the starting lineup after missing Saturday’s practice to receive treatment. … F James Johnson had at least five rebounds and five assists in a game for the fifth time this season. … Miami (10-9) exceeded the .500 mark for the first time since winning two of three to open the season.

Bulls: Chicago coach Fred Hoiberg said he’s “hoping” G David Nwaba will return to practice on Monday. Nwaba (sprained right ankle) missed his ninth consecutive game. … The home game was just Chicago’s seventh of the season, tied with Toronto for fewest in the NBA. … Grant scored 62 points in Chicago’s past three games. His single-game high was 13 prior to this stretch.

The Heat shot 2-of-19 from the field in the first quarter but only trailed 13-7 because the Bulls managed to make just 4-of-24 shots, including 1-for-15 inside the 3-point arc.

The 20 combined points were the fewest in any quarter in Bulls history.

Ellington continued his hot 3-point shooting, going 5-of-8 behind the arc.

The veteran reserve made multiple 3-pointers in each of the Heat’s past four games, going 20-for-35 in that stretch, and at least one in 11 straight. Ellington is shooting 44.2 percent for the season.

Heat: At Cleveland on Tuesday night.

Check out the team sites for the Miami Heat and the Chicago Bulls for more game coverage.