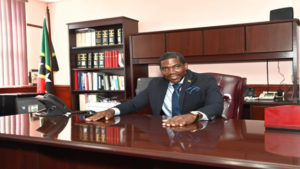 Prime Minister of St Kitts and Nevis Hon Dr Terrance Drew began his first working day in office Tuesday morning when he led his team of cabinet ministers-designate to the Office of the Prime Minister at Government Headquarters on Church Street, Basseterre.

Dr Drew and his Team were greeted by scores of SKNLP supporters and well-wishers outside Masses House, before going to Government Headquarters where he was met on arrival by Cabinet Secretary, Mrs. Josephine Huggins.

Mrs. Huggins then took Dr Drew to the Office of the Prime Minister, the Prime Minister’s Meeting Room and the Cabinet Room. He was accompanied by the successful SKNLP ministers-designate and Ambassador, His Excellency Kenneth Douglas, raising speculation that Kenneth could become the next Cabinet Secretary.

Dr. Terrance Michael Drew was officially sworn in on Saturday, August 6, 2022, as the fourth Prime Minister of the Federation of St. Kitts and Nevis by His Excellency Sir S.W. Tapley Seaton, Governor-General, during a ceremony at Government House.