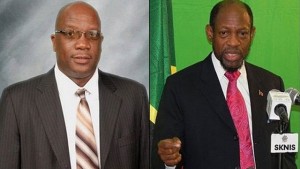 According to a July 22 ruling by his Honor Justice Eddy Ventose, Dr. Harris had until August 2nd to turn over the documents to Dr. Douglas and his legal team. Dr. Douglas told Freedom FM that the deadline for submitting those documents came and his legal team had not received them, an indication he said that the Prime Minister had failed to comply with the court order and was therefore in contempt of court.

“The situation is that the Prime Minister has defied the order of Justice Ventose to hand over those very important documents to me. The documents include an extract from the Cabinet minutes which would recorded the decision of the Harris government to institute certain specific guidelines that had to be met in order for the clinical application of stem cells to human beings being carried out in our hospital here in St. Kitts and Nevis.

“He has refused to give the documents by the deadline on Friday and I now learn from the lawyer that his lawyer communicated and indicated that he had applied to the court to get permission to appeal the ruling of the judge.

“He also said, it would appear in the lawyer’s correspondence that we received late on Friday, that he was asking the court to stay the execution of the judgment because he wanted to appeal. Now I am advised it doesn’t work like that- you can’t wait until the same day when you are supposed to deliver the documents to say that you want to appeal, because you just can’t appeal, you have to seek permission from the court to appeal. If you know you want to appeal, you’re not going to hand over the documents do it at least several days before so that the judge would have time to give you permission.

“So up to when he refused to give me the documents he had had no permission from the judge not to execute the order.”

Dr. Douglas, who is the respondent in the libel case brought against him by Prime Minister Harris since 2016, says Dr. Harris’ failure to comply with the court order was a flagrant disregard for the justice system and rule of law in the country. He said it is his understanding that Dr. Harris had at the last minute on August 2nd, filed intention to appeal the judge’s decision, but in his opinion, it was too late to move the court in that regard.

“I really think that this is a disrespect that is shown for the court. I am one of those who believe that no matter how big you are yes you can attempt to bully the citizens of our country but you cannot bully the judge and the justice system and I personally believe that Dr. Harris is behaving in this high handed way because he thinks that he has some control on the court here in St. Kitts and Nevis. It seems as though he thinks he can get away with anything but it cannot work like that. And it is really not just only upsetting but it is a blatant show of disregard for the justice system in our country and he’s the Prime Minister, the Minister of National Security.

“All we’re saying is let us get the extract from the minutes of the meeting of the Cabinet when these decisions were taken. You would have thought that then first thing that the Prime Minister would do is be glad and happy to hand over to show he has done nothing wrong – he refused when he was first asked so we had to apply to the court to force him to deliver those documents to us. The court said on the 29th [July] that we had to be handed over these documents, that they should be handed over by August 2nd, lo and behold, he had enough time, he said the documents are there, all he has to do is get the Cabinet Secretary to release the documents.

“Instead of that, he simply blatantly refused and we hear the Cabinet Secretary has gone off island. This is a travesty; this is a mockery of the system, and I don’t believe the Prime Minister should disrespect the court in this way.”

When asked what his next legal step is, Dr. Douglas said he was unsure of the status of the matter taking into consideration the Prime Minister’s late filing for a stay of execution.