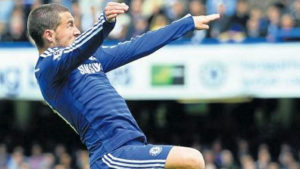 Chelsea signed the 20-year-old Pulisic — regarded as one of the hottest properties in European football — on a five-and-a-half year contract for next season and he will join the Blues in the summer.

Hazard, younger brother of Chelsea attacker Eden, is on Dortmund’s radar as German media widely reports that the 25-year-old has so far rejected an extension to his current Borussia Moenchengladbach contract, which expires in 2020.

The winger, who has weighed in with nine goals and six assists to help fire Gladbach to third in the German league, would reportedly cost 42 million euros ($48.4m).

The Belgium international has expressed interest in joining defending champions Bayern Munich or Dortmund — but only at the of the season.

“At the moment, I can’t say much about other clubs, because I have spoken with (club) Manager Max Eberl about focusing completely on Gladbach in the second half of the season,” said Hazard.

Germany’s top-selling daily Bild reports that one of Dortmund’s lawyers is already in Argentina talking to 19-year-old Boca Juniors defender Balerdi, with his club President Daniel Angelici saying “the player wants to leave us”.

Dortmund are eyeing the Argentina Under-20 international in the current transfer window to cover for Swiss centre back Manuel Akanji, who is sidelined with a groin injury.