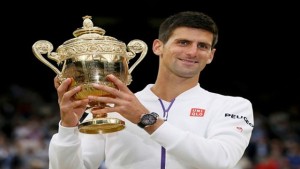 Novak Djokovic, the defending champion, survived a scare against Gilles Simon to reach the last eight of the Australian Open in Melbourne.

Djokovic, 28, is through to his 27th consecutive Grand Slam quarter-final.

“Playing against a player like Gilles you can expect a lot of rallies,” said Djokovic, who is also through to his ninth successive Australian Open quarter-final.

“He is always making you play an extra shot. I made a lot of unforced errors today, but he was fighting, he was playing well, physically it was very demanding and I’m just happy to get through this one.”