Disturbances forecast to bring rain to Puerto Rico, Hispaniola, other parts of Caribbean 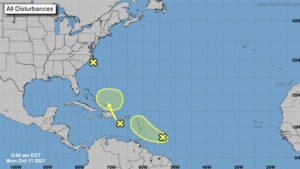 Forecasters are monitoring two disturbances that could bring heavy rain to parts of the Caribbean this week. A system off the coast of North Carolina is also being monitored though its development chance remains low. One of the tropical waves being monitored is causing an area of cloudiness and thunderstorms about 400 miles east-southeast of the Windward Islands early Monday, according to the National Hurricane Center. The disturbance could see some additional development over the next few days as it moves west-northwestward at about 15 mph toward the Lesser Antilles, according to the hurricane center. Forecasters say the system could bring heavy rainfall and gusty winds across portions of the central and northern Lesser Antilles on Tuesday, and across the Virgin Islands and Leeward Islands on Wednesday. It has a 20% chance of formation in the next two days and 30% in the next five days.

The hurricane center is also monitoring a tropical wave over the eastern Caribbean Sea that is producing a large area of disorganized showers and cloudiness. Forecasters expect upper-level winds will limit the system’s development chances over the next day or so, but environmental conditions could become a little more conducive later in the week when it nears the southeastern Bahamas. Regardless of development, heavy rainfall will be possible over portions of the Lesser Antilles, Puerto Rico and Hispaniola during the next couple of days, according to the hurricane center. It has a 10% of formation in the next two days and 20% in the next five days.

Also being monitored: A large, non-tropical low pressure area in the Atlantic that is causing some disorganized showers and thunderstorms just off the coast of North Carolina. While this system has a 0% chance of formation in the next two to five days, forecasters say it could still bring heavy rain and gusty winds to portions of the North Carolina Outer Banks Monday. The next name on the list for the 2021 Atlantic hurricane season is Wanda.