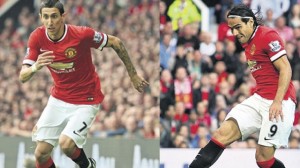 MANCHESTER, England (AFP) — Radamel Falcao made his debut as Manchester United belatedly kickstarted their season with a breezy 4-0 win at home to Queens Park Rangers in the Premier League yesterday.

The 28-year-old Colombia striker, a loan signing from Monaco, made his entrance as a 67th-minute replacement for Juan Mata, but by then United had already secured an overdue first victory of the season.

Falcao, who squandered a late chance, had been the focus of pre-match attention, but it was £59.7 million ($98 million, 75 million euros) record signing Angel di Maria who stole the show on his home debut.

The Argentina winger put Louis van Gaal’s side ahead with a 24th-minute free kick and had a hand in further goals by Ander Herrera, Wayne Rooney and Mata as United blew off the cobwebs in style.

“When you have a result of 4-0 then you can be happy as a coach, but you always have points you can improve.

“We have always to analyse what we have done. The result is fantastic, but we can get much better. This is a good start.”

After two draws and a loss in the league, and a 4-0 humiliation by Milton Keynes Dons in the League Cup, it was United’s first competitive win under Van Gaal and meant they avoided going four league games without winning at the start of a season for the first time since 1986.

While United climbed to ninth in the table, seven points below leaders Chelsea but only two points shy of the top four, QPR remain 16th, a point above the bottom three.

Falcao began the game on the bench on a mild autumnal afternoon, but fellow new signings Daley Blind and Marcos Rojo were both handed starts as Van Gaal abandoned the 3-4-1-2 formation he had introduced in pre-season.

Blind anchored a midfield diamond in front of a flat back four, with Herrera and Di Maria either side of him and Mata supporting strikers Rooney and Robin van Persie.

The sight of former Old Trafford favourite Rio Ferdinand, now of QPR, receiving a memento from United director Bobby Charlton prior to kick-off only reinforced the sense of a changing of the guard.

United quickly took control, with Mata spooning a shot over from Herrera’s cut-back, and mid-way through the first half they went ahead.

Di Maria posed a constant threat and he supplied the breakthrough, whipping in a free kick from wide on the right that eluded everyone to creep in at the far post.

Jonny Evans then had to block a shot from Matt Phillips after United goalkeeper David de Gea charged from his goal and missed his kick, but 10 minutes before half-time the hosts doubled their advantage.

Di Maria was again the inspiration, driving deep into QPR territory and neatly flicking the ball inside for Rooney.

The United captain’s shot was blocked, but he steered the rebound into the path of Herrera, who drove a first-time shot into the bottom-left corner.

The game was up a minute before the break. A slick exchange initiated by Di Maria culminated in Herrera teeing up Rooney to drill a low effort past Rob Green’s outstretched right hand from the edge of the box.

After De Gea had saved with his feet from QPR debutant Niko Kranjcar and Rooney’s prod had been smothered by Green, Mata added a fourth in the 58th minute, firing into the roof of the net from Di Maria’s miscued shot.

Falcao almost crowned his debut with a goal, but after Green had parried a skidding shot from Blind, the former England goalkeeper sprang up quickly to save at the Colombian’s feet.