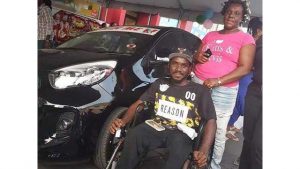 A jovial mother and child were lost for words as elation overtook them when Devrone was named winner of the raffle. Tears of joy and happiness also overtook the onlookers who were present at the draw which took place on the Bay Road in-front of KFC.

Many folks in attendance saw it as divine intervention as Devrone who is disabled has in the past been carried around on his mother’s back.Emcee for the event was G Cue with music provided by DJ Yardie.