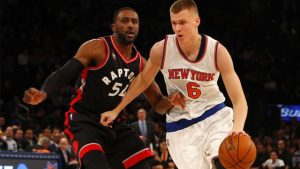 NEW YORK — Plenty of DeMar DeRozan and plenty of defense.

That’s how it will have to be for the Toronto Raptors without Kyle Lowry.

DeRozan made a turnaround jumper with 1.9 seconds remaining, finishing with 37 points and leading the Raptors to a 92-91 victory over the New York Knicks on Monday night.

The Raptors won their fourth in a row after learning earlier in the day that Lowry will have right wrist surgery that could sideline him the rest of the regular season.

Carmelo Anthony scored 24 points for the Knicks, but finished a 9-for-26 night when he missed a long jumper as time expired, tossing his headband in disgust.

Newcomers Serge Ibaka and P.J. Tucker were on the floor down the stretch as the Raptors clawed back from a 17-point, first-half deficit. Ibaka finished with 15 points, helping Toronto limit New York to 38 second-half points.

Toronto moved percentage points ahead of Washington for third place in the Eastern Conference. The Raptors host the Wizards on Wednesday.

Derrick Rose and Courtney Lee each scored 16 points for the Knicks, who waived Brandon Jennings on Monday and learned Joakim Noah will have knee surgery that will knock him out for at least three weeks.

If there’s going to be a playoff push, it will be without two key veterans signed last summer.

The Knicks led by 17 in the first half and 53-40 at halftime, but the Raptors limited them to 14 points in the third quarter to pull to 67-63. Toronto then got the first eight points of the fourth against the Knicks’ stagnant second unit, taking a 71-67 lead and forcing Anthony and Rose to re-enter with 9:25 remaining.

“A sense of urgency kicked in,” DeRozan said. “You never want to lose. When you get down a lot like that, you want to pick it up and fight a lot harder. It’s a bad thing to get down that much, but it just shows you the fight we have.”

It went back and forth from there, with Lee’s 3-pointer giving the Knicks a 92-91 lead with 10.6 seconds to play. But the Raptors got the ball to DeRozan, who spun left and launched his jumper while falling away.

Raptors: Toronto has won the last six meetings. … Casey needs one win for 300 has an NBA coach. … DeRozan has scored 20 or more in eight straight games against the Knicks.

On Sunday, Casey said the swelling in Lowry’s wrist was down and said the point guard was day-to-day. The Raptors listed him as questionable in their game notes Monday, but surgery was recommended after he got a second opinion Monday . Lowry said he wasn’t really surprised because he didn’t know what to expect.

“I had no idea what it would be,” he said. “I thought some local treatment may have helped it but it just wasn’t getting any better.”

Jennings’ departure came a day after Phil Jackson confidante Charley Rosen wrote on Fanragsports.com that Jennings “resists the triangle” and is a “profound disappointment” because of his erratic play.

The Knicks have focused since the break on playing more triangle, Jackson’s preferred offense, while Jennings thrives in playing faster.

But coach Jeff Hornacek said Jennings only wanted to play more, not differently.

“Brandon obviously wanted to play more minutes here,” Hornacek said. “With Derrick out there, it made it awfully tough, so maybe this gives him an opportunity to get somewhere where he can play some more minutes.”

Knicks: Visit the Magic on Wednesday, their first of two trips to Orlando in a seven-day span.

Check out the team sites for the Toronto Raptors and the New York Knicks for more game coverage.