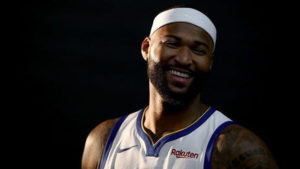 Warriors coach Steve Kerr said not to compare his team to the 1997-98 “last dance” Bulls – and he’s right.

Stephen Curry and Draymond Green are locked up beyond next season. Kevin Durant, Klay Thompson and DeMarcus Cousins can become free agents, and though Durant is a wildcard, Thompson has been consistent in his plan to return to Golden State.

In 1997, Michael Jordan, Scottie Pippen, Dennis Rodman and Chicago coach Phil Jackson were on expiring contracts. Before the season, Bulls general manager Jerry Krause said, “Beyond this contract, Phil agrees it’s better we part company. At the end of next season, there will be a new coach here.” And Jordan had already said, “Phil should be the head coach, and I shouldn’t have to make the decision to play for another coach other than Phil. Simple as that. Sad as it may be, I will not choose to play for another coach.” So, you do the math.

But that was maybe the last time a star entered a season as likely to leave his team afterward as Cousins with the Warriors.

At least if Cousins is still a star.

Cousins is recovering from a torn Achilles suffered last January. It’s far from certain how the 6-foot-11, 270-pound 28-year-old will play once he gets back on the court. This is a serious enough setback to at least consider Cousins is done as a star.

But if all goes well, his immense talent will shine again. He’ll help the Warriors win their third straight championship and fourth in five years. Along the way, he’ll pick up good habits as he adjusts to Golden State’s system.

And he’ll almost certainly leave in free agency next summer.

The highest starting salary the Warriors can give Cousins next year is $6,404,400 unless they clear more cap space. After a successful season, Cousins should command far more in free agency.

If this season doesn’t go to plan, it’s hard to see Golden State welcoming back Cousins. The Warriors were elite without him and probably wouldn’t hesitate to move on if this experiment fails.

So, either way, he appears to be a one-year rental.

How will it go?

Will Cousins put aside individual concerns, knowing this will be the only year he’ll be in this position? Or will he feel the need to prove himself in the short time before free agency?

Will the Warriors have time to fully welcome him into their culture? Will they care if he fully acclimates, considering it seems he’s just passing through anyway?

If Cousins flourishes with Golden State, will other teams improve offers to Cousins in free agency? Or will they just assign his success to the Warriors’ culture and continue to fret about his leg and attitude?

There is a remote possibility he stays in Golden State beyond this season. Maybe he signs a one-year contract to establish Early Bird Rights, which would allow the Warriors to pay him up to $11,207,700 in 2020, though he could get that much only by signing for at least two years at that point. He could even work toward spending three years with Golden State, which would give him Full Bird Rights and the ability to re-sign for up to the max. Or maybe Durant leaves in free agency next summer, and Thompson is willing to take a massive discount. Then maybe the Warriors could carve out enough cap space to re-sign Cousins to a larger contract.

But that all seems farfetched.

Cousins isn’t entering the ring-chasing phase of his career. He has gotten one big contract, but he signed that before the new national TV contracts lifted player salaries into the stratosphere. It’s hard to see him not caring about getting one monster deal. His season will be building toward that goal.

It’ll also be about the Warriors pursuing another championship, of course. A lot of forces are coinciding in Golden State in a short time, which leads to mounting pressure.

That drove the 1997-98 Bulls to greatness. They won a third straight title before Jordan (retirement), Pippen (Rockets), Rodman (Lakers) and Jackson (retirement) all moved on.

The final-song sentiment isn’t as wide with the Warriors, but it will be worth watching Cousins in his one-man “last dance.”