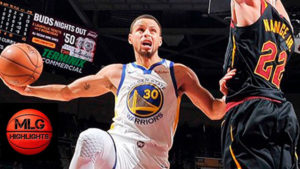 CLEVELAND — Their fierce rivalry is over, reduced to only memories.

The Warriors and Cavaliers had something special, four straight NBA Finals that Steph Curry will one day savor.

“It was historical,” Curry said. “I’ll definitely sit back on the couch in 10 or 12 years when it’s all over and think about what it was like to play here, and how high the stakes were every time we came into this building.”

Right now, Curry and the Warriors aren’t ready to reminisce.

Curry made nine 3-pointers and scored 42 points, Kevin Durant added 25 and Golden State returned to face a very different looking Cleveland team for the first time since winning another NBA title and beat the Cavaliers 129-105 on Wednesday night.

Fully healed after missing 11 games with a strained groin, Curry scored nine points in less than a minute midway through the fourth quarter to help the Warriors pull away for their eighth straight win over their former Finals rivals. Curry added nine rebounds and seven assists, and Durant had 10 rebounds and nine assists.

It was Golden State’s first visit to Cleveland since June, when the Warriors completed a sweep to win their third championship in four years.

Nothing in Quicken Loans Arena felt or looked the same.

“The energy before the game, after the game,” Durant said, noting the changes in Cleveland. “There were more media members here the last couple of years. We were talking about that before we ran out on the floor. That was a circus right here during the Finals. You start thinking about the great memories you had, especially the championship.

“I’m sure we’ll feel those feelings every time we walk into the building.”

This was the first matchup between the Warriors and Cavaliers since LeBron James left as a free agent last summer. The Cavs are starting from scratch after a four-year run as Eastern Conference champions, and they’re struggling without All-Star Kevin Love, who is recovering from foot surgery and while forward J.R. Smith is on a forced hiatus.

There are no playoff plans in Cleveland, where fans are keeping as close an eye on Duke’s talented freshmen players as what the Cavs are doing.

Tristan Thompson, one of the only holdovers from those powerful Cavs teams, had 19 rebounds and 14 points. Rookie Collin Sexton scored 20 points for Cleveland.

For Warriors coach Steve Kerr, the Golden State-Cleveland Finals, a four-act play loaded with drama and intensity, had it all.

“Some of the best basketball I’ve ever seen in my life,” Kerr said before the game. “Obviously, they have a new team and so you move on. Part of me is a little nostalgic for that.”

But those days are gone.

“It’s not a rivalry, it’s another game,” Kerr added. “They’re trying to build something and we’re trying to continue our run for as long as we can.”

The Warriors had trouble shaking the Cavs until Curry took control.

Golden State’s lead was just 10 when he got fouled while hitting a 3-pointer and completed the four-point play. He then buried another 3 and followed that with two free throws to put the Warriors ahead 116-99 with 5:34 left.

Kerr isn’t surprised Curry is back to being himself.

“It’s pretty rare, but Steph is rare in general in everything he does,” he said. “We’ve seen it before where Steph was out with an injury and comes back and starts lighting it up right away. The guy keeps himself in amazing shape, which allows him to come back pretty quickly if there is an injury.”

Rodney Hood’s off-balance heave — he caught the ball in and flung it toward the hoop — gave Cleveland a 64-58 lead and capped an action-packed first half.

With Hood scoring nine quick points, the Cavs opened with a 12-2 run, fell behind by eight and then made three 3-pointers and scored 11 points in the final 1:10.

Curry scored 25 in the opening half, making six 3-pointers.

Warriors: Kerr said F Draymond Green (sprained toe) could return as early as Monday when Golden State hosts Minnesota. Green has gradually increased his on-court work of late and Kerr said he “had another good day today. He’s really making strides.” Green rode the stationary bike in the hallway outside the Warriors locker room before the game. … On a five-game road trip without a single back-to-back for the first time since 1985-86. … C DeMarcus Cousins (Achilles) has started practicing and is making progress, but the team does not have a specific timeline for his return. … Durant and Shaun Livingston were assessed technicals.

Cavaliers: Thompson, too, said the Warriors-Cavaliers rivalry is officially over. “It’s in the past. New season. New team. Our ballclub is different and they’ve made some changes, but predominantly the same. That’s all the last four years,” Thompson said. “That was great for the NBA. We’re in a new chapter for our organization.” … Coach Larry Drew said there is one positive to the Cavs no longer being an elite team. “I get Christmas off this year, so I’m excited about that,” he joked. Turning serious, Drew said he’ll savor the best run in Cleveland history. “I’ll look back personally and just say, `Wow I was in the Finals four straight years’ and that’s something I’ll always remember,” he said.