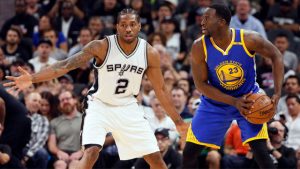 SAN ANTONIO — Golden State made sure the inevitable was unavoidable.

Heavily favored to beat the Spurs, especially once Kawhi Leonard sustained a series-ending injury, the Warriors completed a dominant sweep in the Western Conference Finals.

“(Being) 12-0 is great, but it doesn’t mean anything going into the next series, and we understand that,” Curry said.

Golden State led by as many as 22 points in cruising to its third straight NBA Finals. The Warriors await a possible third straight championship matchup with Cleveland, which leads Boston 2-1 in the East finals.

“It’s great to be one of the last two teams standing, we’ll see how it goes,” said Kevin Durant, who had 29 points and 12 rebounds.

San Antonio’s only lead came on the opening possession when Manu Ginobili tossed in a left-handed scoop shot. The Spurs started Ginobili in what could be his final game with the team. The 39-year-old had maintained he will not ponder whether to retire or return until after the season.

“We started him tonight out of respect,” San Antonio coach Gregg Popovich said. “That was the whole reason for starting him. Before the game, you think it may or may not be his last game that he ever plays in, and I did not want to miss the opportunity to honor him in front of our home fans for his selflessness over the years.”

Unsure if the beloved veteran will return, the crowd serenaded Ginobili with “Manu, Manu” chants as the game came to a close.

“He kind of worked us pretty good these four games,” said Draymond Green, who had 16 points, eight rebounds and eight assists for the Warriors. “So, I think he’s got quite a bit left in the tank. Obviously, it’s up to him how much longer he wants to go. But one thing about it, he’s definitely not a liability on the floor.”

Ginobili finished with 15 points in 32 minutes.

Kyle Anderson scored 20 points to lead the Spurs, who were without Leonard, Tony Parker and David Lee.

“Obviously it (stinks) that Kawhi wasn’t there and Tony wasn’t there and David wasn’t out there,” Green said. “But, at the end of the day, a win is a win and you have to beat whoever is out there against you.”

San Antonio didn’t go down without a fight despite the injuries.

Anderson dove on the court for a loose ball that the Spurs had tipped away defensively, pushing the ball upcourt to Patty Mills who fed Ginobili for a 3-pointer that pulled San Antonio to 108-94 with 7 minutes remaining.

The effort made Popovich smile and clap at times, but the Warriors’ depth and talent proved too much for short-handed San Antonio.

“It’s the second time we’ve gotten swept in 15 years, and those are the easiest to digest because you’ve been overplayed,” Ginobili said. “The opponent was better than us, and in this case, way better than us.”

Warriors: Golden State has won five straight games over San Antonio, including the regular season, which is the team’s longest against the Spurs. .. Warriors starting center Zaza Pachulia missed his second straight game with a bruised right heel. Pachulia’s absence allowed him to escape the ire of the Spurs fans, who blame him for Leonard’s absence after his controversial close-out on a 3-pointer that Popovich called “dangerous” and “unsportsmanlike.” … Golden State has won six straight road games in the postseason, which is a franchise record.

Spurs: Leonard missed his third straight game with a sprained left ankle. Popovich announced his All-Star forward would not play about two hours prior to tipoff. … Ginobili had come off the bench in 55 straight playoff games prior to his start in Game 4. … Murray’s four steals in the first half tied Ginobili’s franchise record for most steals in a playoff game.

Golden State coach Mike Brown said it was tough competing against Popovich, his longtime friend and one of his mentors, but the veteran coach put the series in perspective during a phone call prior to the start of the series.

Spurs forward LaMarcus Aldridge closed out a disappointing series with his second eight-point effort against the Warriors.

He entered Game 4 averaging 18 points, but was held to 4-for-11 shooting in 22 minutes in the series finale. Aldridge didn’t address his own personal struggles, but praised the team’s effort.

“No excuses but a lot of unfortunate things happened, but we still tried to compete and do the best we could do,” Aldridge said. “They’ve been the best team in the west for the last few years and they proved it again. (Warriors) came out and competed, they had a good game plan for the guys that we had out there, we just came out and did everything we could do.”

Ginobili’s closest friend on the Spurs is Mills, which puzzles the 28-year-old.

“I don’t know why we have such a good relationship, he is so much older than me, you know,” Mills said, jokingly. “It’s weird, it’s like grandpa and grandson, but still very close.”

Check out the team sites for the Golden State Warriors and the San Antonio Spurs for more game coverage.