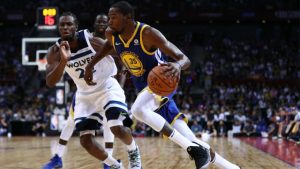 OAKLAND, Calif. — Steve Kerr will never wish for a star player to sit injured as Kevin Durant did against Minnesota on Wednesday night.

The Golden State coach sure saw a lot of encouraging signs from many in his supporting cast to pick up the slack with the NBA Finals MVP nursing a bruised left thigh.

The good ol’ standbys did their share of dazzling, too.

Even without injured KD, the defending champs began to look like their dominant selves behind another strong defensive performance.

“Five guys helping and communicating, talking, it was a thing of beauty tonight,” Curry said of the defense.

Draymond Green posted another balanced effort with seven points, six rebounds, six assists and two blocks for the Warriors, who played without NBA Finals MVP Durant as he nursed a bruised left thigh.

Andre Iguodala started in place of Durant, and the 2015 Finals MVP scored a season-high 11 points. The Warriors notched a season-best quarter with 44 points in the third to pull away after leading 51-50 at halftime.

“I actually kind of like these games when we have to sit somebody,” Kerr said. “We have so much talent, we can afford to miss one of our main guys. It’s good for the team, it’s good for morale, it’s good for individual development, and it forces the group to play together when you’re missing one of your main guys.”

Andrew Wiggins scored 17 points and Karl-Anthony Towns had 16 points and 12 rebounds as the Timberwolves had their five-game winning streak snapped.

This marked the first regular-season matchup between the teams after they played a pair of exhibition games in China last month.

It’s the first time the teams faced off each atop their respective divisions. Only three times previously had they played both with records of .500 or above.

“We got humbled tonight,” Minnesota’s Taj Gibson said. “That’s the kind of level we want to get to, the way they’re playing over there.”

Golden State had to overcome another cold start on offense, shooting 8 for 22 in the first quarter — 4 of 10 on 3s. Two days earlier in a win against Miami, the Warriors shot 36.8 percent and 11 of 32 from beyond the arc.

Durant categorized his injury as “nothing too serious.” He said he hurt the quadriceps muscle the first play of the game against the Heat on Monday.

“If this were a playoff game, he’d be playing, but it’s not, so it makes perfect sense to give him tonight off,” Kerr said. “We have a couple more nights before our next game. He should be fine I would think by then.”

KD hopes to play Saturday against the 76ers.

Warriors great Al Attles returned to Oracle Arena one day after his 81st birthday and the entire arena sang “Happy Birthday” during the second quarter as Attles waved and smiled. A former player, coach and general manager of the team — he was part of Wilt Chamberlain’s 100-point game — he had missed a night honoring him Oct. 27.

When Kerr announced pregame that Iguodala would replace Durant, he stopped and instructed everyone they could tweet out the news before he resumed the media session.

Then, he began clipping his fingernails and said the media could let him know when ready to proceed.

“Hang on, I’ve got a troublesome cuticle,” he quipped.

Timberwolves: Minnesota missed all eight of its 3-pointers in the opening period and its first 11 overall before Nemanja Bjelica hit the Timberwolves’ first make from deep at the 7:24 mark of the second quarter. … The T-Wolves lost a third straight and 17th in 22 on Golden State’s home floor.

Timberwolves: At Phoenix on Saturday night.

Warriors: Look to beat Philadelphia for a ninth straight time overall and sixth in a row at home Saturday night.