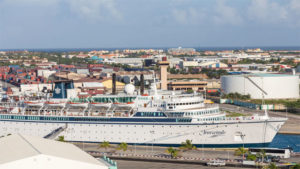 A cruise ship with nearly 300 passengers and crew was ordered quarantined in the Caribbean port of St. Lucia after a case of measles was confirmed on board, island health officials said Wednesday.

The ship has been under quarantine since Monday morning, officials said.

“Measles in a highly contagious disease. Anyone who is not adequately immunized against measles can contract the disease, if there has been close contact with a confirmed case,” according to a statement issued Wednesday by Dr. Merlene Fredericks-James, the island nation’s chief medical officer. “It is therefore likely that other persons on the boat may have been exposed.”

“The ship’s doctor has the confirmed case in isolation on the ship,” Dr. Fredericks-James added. “The individual is in stable condition.”

But St. Lucia Coast Guard Sgt. Victor Theodore told NBC News that the vessel involved is named “Freewinds,” which is the name of a 440-foot cruise ship owned and operated by the Church of Scientology

Theodore identified the quarantined craft as the same one that’s listed on the church’s website.

While no one has been allowed to leave the ship, St. Lucian authorities said they don’t have the authority to keep it from leaving.

For now, the ship is scheduled to leave St. Lucia at 11:59 p.m. on Thursday, officials said.

“The ship can leave our port, but we have no jurisdiction over their next destination,” Dr. Fredericks-James told NBC News.

A Scientology spokesperson could not be immediately reached for comment on Wednesday.

The Pan American Health Organization said it’s aware of the measles case on this cruise ship, but declined to comment or reveal any additional details.

The once-vanquished disease has made a surprising comeback in recent months, with more than 700 cases reported in the United States this year, officials said.

It’s the highest number of reported cases in the U.S. in a year since 1994. The had been declared eliminated in 2000.

Southern California health officials have even asked fans of the blockbuster movie “Avengers: Endgame” to check their ticket stubs.

That’s because a California woman in her 20s, with a confirmed case of measles, went to the see the superhero movie at the AMC in Fullerton. Anyone who was at that theater between 11 p.m. Thursday to 4 a.m. on Friday is being urged to get a screening.