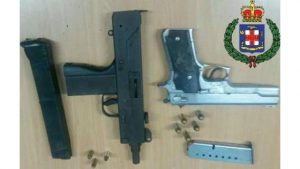 FOLLOWING Tuesday’s brazen attack on a policewoman and her family in Portmore, St Catherine, the Police High Command yesterday raised the threat level against cops to extreme.

In fact, the police believe Tuesday’s attack was a reprisal in connection with the fatal shooting of a man by the police in the parish earlier that day.

In a release from the constabulary’s Corporate Communications Unit, the police said an extreme threat level means attacks against colleagues, both on and off duty, are imminent.

The police said the threat level was raised because besides Tuesday’s attack, there were two other attacks on cops at their homes in recent weeks and several other incidents in which police officers on patrol were fired on.

In addition, the police said the Security and Intelligence Branch has advised that threats against police officers are being received in St Catherine, St Thomas and St James, reportedly in response to recent fatal shootings in those parishes.

Tuesday’s attack, according to Assistant Commissioner of Police Derrick Knight, who is in charge of Police Area Five, is believed to have been spurred by the death of 23-year-old Raheem Chantiloupe. He was killed in an alleged confrontation with a police team in Naggo Head about 3:00 pm Tuesday.

The police said he had been charged with murder.

Reports from the police are that about 8:20 pm, three men invaded the policewoman’s home and opened gunfire, injuring the police inspector and her two daughters — one of whom is also a police 0fficer.

The policewoman is reported to have returned gunfire and one man, who the police suspect is one of the gunmen who invaded her home, was found dead in the aftermath of the incident.

He is yet to be identified, the police said. The other suspects reportedly escaped.

Yesterday, the Police High Command urged all police officers to take the threat assessment seriously and raise their level of awareness and anticipation, especially while off duty. Police officers were also advised to take the necessary measures to keep themselves and their families safe.

The Police High Command also reminded members that they have its full support and that it is lawful to use as much force as is necessary, in keeping with the Jamaica Constabulary Force’s Use of Force and Firearm and Human Rights policies, to defend themselves, their colleagues and citizens against any attack.