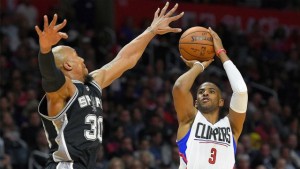 Clippers guard Chris Paul goes for 28 points and 12 assists against David West and the Spurs on Thursday in Los Angeles. The Clippers won 105-86.

LOS ANGELES — Chris Paul poured all his emotion from a long, difficult day into his night job, willing his team to victory while playing a game-high 37 minutes.

Paul had 28 points and 12 assists hours after attending a funeral in Oklahoma, and the Los Angeles Clippers led all the way to beat San Antonio 105-86 on Thursday night, snapping the Spurs’ six-game winning streak coming out of the All-Star break.

About two hours before tipoff, Paul returned from Oklahoma City where he attended the funeral of Ingrid Williams, wife of Thunder assistant coach Monty Williams, whom he knows from his days playing in New Orleans. She was killed in a car accident at age 44.

“It really put a lot of stuff in perspective,” Paul said. “At the end of the day, it is just basketball.”

Reserve Jamal Crawford added 19 points and J.J. Redick had 17 points for the Clippers, who saw their 20-point lead whittled to five in the fourth quarter before they exploded offensively.

Paul scored 18 points in the quarter when he also set up some nifty assists on a 3-pointer by Crawford and a monster dunk by DeAndre Jordan, who also played 37 minutes.

“Chris’ leadership has been through the roof,” Crawford said. “Everybody stepped up.”

Tony Parker scored 14 points and West had 12 for the Spurs, whose 45-9 record is second-best in the NBA. Duncan had two points on 1-of-6 shooting and grabbed six rebounds in 20 minutes.

“The group did not play at a high enough level to win a road game,” West said. “We were not solid enough, and obviously we shot the ball like crap in the first half. We just could not execute enough to keep pace with them.”

The Spurs made a big run late in the third, rallying from 20 points down to within nine. West scored seven points in their 21-10 spurt. He had three of their first four points in the fourth to get to 72-67.

That’s when Paul got his team going. He found Crawford alone in the left corner for a 3, then Paul scored five straight points before Jordan slammed down his alley-oop pass. Paul got fouled attempting a 3-pointer and made all three free throws for an 85-73 lead.

By then, the Spurs were done.

Paul kept scoring before sitting down for good and turning over the offense to Crawford in the final minutes.

The Clippers opened their 20-point lead by outscoring the Spurs 20-8 to start the third. Redick had eight points and Paul added seven while they combined to hit three 3-pointers.

Clippers: F Blake Griffin and assistant equipment manager Matias Testi rejoined the team for the first time since Griffin punched his friend in the face on Jan. 23 in Toronto. Griffin is recovering from a broken hand and won’t play until sometime next month. … G Austin Rivers said he expects to return in 10 days to two weeks from a hairline fracture in his left hand. “It’s healing really fast,” he said. … Reserve G Pablo Prigioni sat out because of a viral illness.

The Clippers sent guard Lance Stephenson to Memphis for forward Jeff Green and a future protected first-round draft pick. Rivers said he told his front office staff to make the deal just as the funeral was starting in Oklahoma City.

“I really didn’t know if the trade was done because I didn’t want to look at my phone,” he said.

Rivers said the Clippers would have kept Stephenson if they hadn’t been able to get Green’s length. Stephenson’s time in Los Angeles was uneventful after he had some rocky experiences earlier in his career.

“The guy was great and guys really liked him,” Rivers said. “I was really happy with him as far as how he carried himself.”