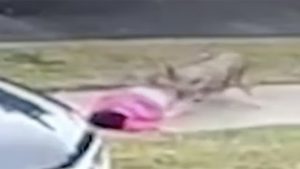 A coyote ambushed a two-year-old girl moments after she had been taken out of a car seat, in a brazen attack outside her Los Angeles home.

Surveillance footage captured the moment the coyote grabbed the toddler in its jaws and dragged the child several metres across the sidewalk, before her father Ariel Eliyahuo charged at the animal and chased it away.

Mr Eliyahuo told KTLA he and wife Shira just arrived at their Woodland Hills home after taking the child to pre-school when he set her down next to the car.

He heard the child screaming for help and initially thought she might have fallen over.

As the coyote bit down on her legs and dragged her facedown, Mr Eliyahuo shouted at the animal in Hebrew to scare it away.

“I saw blood on her pants and on her leg and where she got injured. It was just terrible,” he told CBS Los Angeles.

They rushed the unnamed child to a nearby hospital where she was given rabies shots, Ms Eliyahuo told the station.

The family say they have often seen coyotes in the neighbourhood and are calling on wildlife officers to take action.

A California Department of Fish and Wildlife spokesperson told CBS it was patrolling the area after receiving numerous reports of an aggressive coyote.

Coyote attacks are becoming increasingly frequent in Los Angeles, with seven occurring in LA County this year, according to the Los Angeles Times.