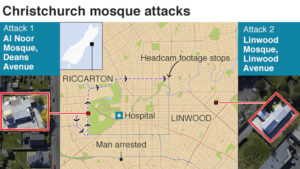 Forty-nine people have been killed and at least 20 wounded in shootings at two mosques in Christchurch, New Zealand, in the nation’s deadliest attack.

Prime Minister Jacinda Ardern described it as a terrorist attack and one of New Zealand’s “darkest days”.

A gunman identifying himself as an Australian live-streamed the rampage at Al Noor mosque to Facebook. He had espoused racist, anti-immigrant views.

Police say a man in his late 20s has been arrested and charged with murder.

Two other men and one woman were also detained. One was released later.

No names have been made public. Firearms and explosive devices were recovered, Police Commissioner Mike Bush said.

The gunman live-streaming the attack from a head-mounted camera said he was a 28-year-old Australian called Brenton Tarrant. The footage showed him firing indiscriminately at men, women and children from close range inside the Al Noor mosque.

Police called on the public not to share the “extremely distressing” footage online. Facebook said it had removed the gunman’s Facebook and Instagram accounts and was working to remove any copies of the footage.

The suspect who was charged appeared to have published a document before the attack outlining his intentions as well as details about the plan for the attack. He is due in court on Saturday morning.

Australian Prime Minister Scott Morrison described the man as an “extremist, right-wing” terrorist. New Zealand Police Commissioner Bush confirmed that the man was not known in advance to either New Zealand or Australian security services.

How events unfolded
The first report of an attack came from the Al Noor mosque in central Christchurch.

A gunman drove to the mosque’s front door and entered to begin firing indiscriminately. The live-streaming of the attack lasted some 17 minutes.

Witnesses told local media they ran for their lives, and saw people bleeding on the ground outside the building.

One unnamed survivor told TV New Zealand he saw the gunman shoot a man directly in the chest. The attacker reportedly targeted the men’s prayer room in the mosque, then moved to the women’s room.

“What I did was basically just waiting and praying, God please, let this guy run out of bullets,” the witness said. “He came to this side, he shot this side, he went to another room and went to the ladies’ section and shot them. I just heard one of the ladies has died.”

The gunman is then said to have driven to Linwood where the second shooting occurred.

One witness described how one of the worshippers had managed to disarm the man, who ran to a waiting car outside.

It is not clear where the arrests were made. Police also defused “a number of IEDs [explosive devices] attached to vehicles”, Mr Bush said.’

Authorities advised all mosques in the city to shut down until further notice. Armed police were also seen at Papanui High School in Christchurch, which was cordoned off.

Mr Bush said a number of firearms had been recovered from both mosques, and explosive devices were found in a car belonging to one of the suspects.

Police advised Christchurch residents to remain off the streets and stay indoors and a lockdown was implemented at all schools in the area. The lockdown was later lifted and parents allowed to collect their children.

The main suspect
Brenton Tarrant identified himself in the video live-streamed on Facebook.

Social media accounts in that name were used to post a lengthy, racist document in which the author identified the mosques that were later attacked and set out anti-immigrant motivations for the attack.

Although New Zealand police said they had charged a man in his late 20s with murder, they did not identify the man.

Cricket team escapes attack
The Bangladesh national cricket team appeared to have narrowly escaped the shooting. A reporter following the team, which was due to play New Zealand in a now-cancelled test match on Saturday, tweeted that the team had “escaped from a mosque near Hagley Park where there were active shooters”.

Player Tamim Iqbal tweeted that the “entire team got saved from active shooters”.

Bangladesh Cricket Board spokesman Jalal Yunus said most of the team had gone to mosque by bus and were about to go inside when the incident took place.

“They’re safe. But they are mentally shocked. We have asked the team to stay confined in the hotel,” he told the AFP news agency.

Global reaction
“It is clear that this can now only be described as a terrorist attack,” Prime Minister Ardern said in a press conference.

In a tweet, she said: “What has happened in Christchurch is an extraordinary act of unprecedented violence. It has no place in New Zealand. Many of those affected will be members of our migrant communities – New Zealand is their home – they are us.”

US President Donald Trump offered his “warmest sympathy and best wishes” to New Zealand. “The US stands by New Zealand for anything we can do. God bless all!” he wrote.

Donald J. Trump
✔
@realDonaldTrump
My warmest sympathy and best wishes goes out to the people of New Zealand after the horrible massacre in the Mosques. 49 innocent people have so senselessly died, with so many more seriously injured. The U.S. stands by New Zealand for anything we can do. God bless all!

86.8K
4:41 AM – Mar 15, 2019
Twitter Ads info and privacy
40.8K people are talking about this
Report
End of Twitter post by @realDonaldTrump
UK Prime Minister Theresa May offered her “deepest condolences to the people of New Zealand”.

Theresa May
✔
@theresa_may
On behalf of the UK, my deepest condolences to the people of New Zealand after the horrifying terrorist attack in Christchurch. My thoughts are with all of those affected by this sickening act of violence.

13.5K
12:46 AM – Mar 15, 2019
Twitter Ads info and privacy
4,808 people are talking about this
Report
End of Twitter post by @theresa_may
The Queen said she was “deeply saddened by the appalling events in Christchurch today. Prince Philip and I send our condolences”.

The Royal Family
✔
@RoyalFamily
The Queen has sent the following message to the people of New Zealand.

I have been deeply saddened by the appalling events in Christchurch today. Prince Philip and I send our condolences to the families and friends of those who have lost their lives…(1/2)

The Royal Family
✔
@RoyalFamily
Replying to @RoyalFamily
…I also pay tribute to the emergency services and volunteers who are providing support to those who have been injured.

At this tragic time, my thoughts and prayers are with all New Zealanders.

A message from The Queen to the people of New Zealand
I have been deeply saddened by the appalling events in Christchurch today. Prince Philip and I send our condolences to the families and friends of those who have lost their lives. I also pay tribute…

royal.uk
1,037 people are talking about this
Report
End of Twitter post 2 by @RoyalFamily
Pope Francis offered his “heartfelt solidarity” and was “deeply saddened to learn of the injury and loss of life caused by the senseless acts of violence”, Vatican Secretary of State Pietro Parolin said in a telegram.

German Chancellor Angela Merkel said she mourned “with New Zealanders for their fellow citizens who were attacked and murdered out of racist hatred while peacefully praying in their mosques”.

And French President Emmanuel Macron called it an “odious attack” and said France stood “against any form of extremism”.