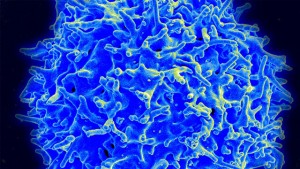 LONDON, England, Tuesday April 21, 2015 – A team led by Imperial College London has developed a treatment that could significantly increase patients’ ability to fight off cancer.

The researchers discovered a protein that helps boost the body’s defences tenfold by promoting the production of immune cells called cytotoxic T-cells, which have the ability to detect cancerous cells, hunt them down, and destroy them.

Cytotoxic T-cells are an important component of the immune system, but when faced with serious infections or advanced cancer, they are usually unable to mobilise in large enough quantities to fight the disease.

In a serendipitous discovery in mice, a previously unknown protein – which the scientists called the lymphocyte expansion molecule (LEM) – was found to dramatically boost the body’s number of T-cells.

The researchers are now developing a gene therapy that would increase the production of LEM proteins, in turn boosting the number of T-cells available to seek out and destroy cancer cells.

The therapy would use individual patients’ T-cells, which would be removed, modified with the insertion of LEM-producing genes, and then gradually infused back into
the patients.

The treatment, which might also be used to treat other viruses, was revealed in the journal Science last week.

“Genetically engineering T cells to augment their ability to fight cancer has been a goal for some time and techniques for modifying them already exist.

“By introducing an active version of the LEM gene into the T-cells of cancer patients, we hope we can provide a robust treatment for patients.

“Next we will test the therapy in mice, make sure it is safe and see if it can be combined with other therapies.

“If all goes well, we hope to be ready to carry out human trials in about three years.”

He added that gene therapy would initially be used to treat patients with advanced cancer, and would be relatively expensive because it would effectively be personalised each time, relying on an extraction of the patient’s own cells.

He nevertheless insisted that the cost would be manageable, given the significant benefits it could bring.

The development came when the Imperial team, while screening mice with genetic mutations, discovered a strain of mice that produced ten times as many cytotoxic T-cells when infected with a virus than normal mice.

The discovery was unexpected because the new protein had no known function and resembled no other protein known to science.

Yet the mice not only suppressed infections more effectively and were far more resistant to cancer, but also produced more of a second type of T-cells, memory cells, which enabled them to recognise previous infections and launch a rapid response.

The researchers went on to show that the LEM molecule had a similar impact on the human immune system.

The research, which also involved scientists from Queen Mary University of London, Harvard Medical School in the United States, and ETH Zurich in Switzerland, has been six years in the making.