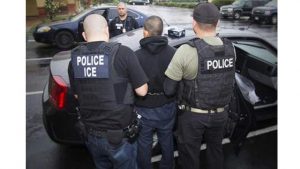 NEWARK, United States (CMC) — Caribbean nationals are among 36 people arrested by law enforcement authorities in the United States during a five-day operation as part of an on-going “public safety efforts” campaign.

The United States Immigration and Customs Enforcement (ICE) said that the operation targeted criminal immigrants who were previously incarcerated at the Middlesex County Jail (MCJ) in New Jersey, and who were subsequently released to the community by MCJ without honouring the ICE detainer or advising ICE of their release.

An immigration detainer is a tool used by ICE and other US Department of Homeland Security (DHS) officials when the agency identifies potentially deportable individuals who are held in jails or prisons nationwide, according to the American Immigration Council.

ICE said the operation also targeted other criminal immigrants residing in Middlesex County. The Caribbean immigrants arrested as part of the operation were nationals of Anguilla, Belize, Cuba, Dominican Republic, and Trinidad and Tobago.

ICE said these individuals range from 19 to 62 years old, and all were previously arrested or convicted of a variety of offenses.

Some of the arrests and convictions included sexual assault of a minor, child abuse, criminal restraint of a minor, domestic violence, possession of narcotics, distribution of narcotics, robbery, receiving stolen property, theft, aggravated assault, hindering apprehension, resisting officer, driving under the influence (DUI), unsworn falsification, possession of a weapon, burglary, prostitution and illegal re-entry into the US.

ICE said among those arrested during the operation included a Trinidadian citizen arrested for “hindering apprehension and unsworn falsification.”