CAS to give Sharapova verdict today 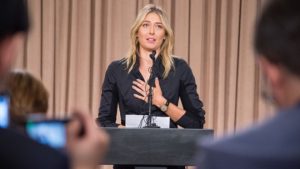 In a statement, the Court of Arbitration for Sport (CAS) in Lausanne, Switzerland, said the verdict will be issued at 3:00 pm (1300 GMT).

The 29-year-old Russian tested positive for the banned medication meldonium during January’s Australian Open. In a severe blow to her reputation, the infringement was revealed in March.

The product had just been added to the World Anti-Doping Agency (WADA) list on January 1.

The ruling had initially been expected in July, with Sharapova hoping to be reinstated in time for the Rio Games.

But both Sharapova’s camp and the International Tennis Federation, which imposed the ban, needed further time in preparing their case.

The five-time grand slam winner said she had been taking the substance for 10 years to help treat illnesses, a heart issue, and a magnesium deficiency.

She also claimed it had entirely escaped her attention that the product had been added to the banned substance list.