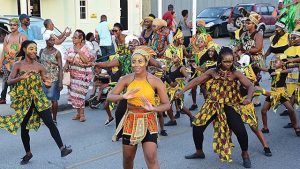 It was a cultural extravaganza as the 13th Caribbean Festival of Arts (CARIFESTA XIII) officially began yesterday, after being delayed by Tropical Storm Harvey which affected the island last Thursday night into Friday.

It started with a parade through the streets of Bridgetown, which featured colour performers dancing, prancing and gyrating to the energetic rhythm of drums, whistles and flutes, as artists from more than 20 regional nations made their way from Queen’s Park to Kensington Oval to signal the start of the region’s largest cultural festival which will feature more than 500 events.

Although not all the delegations were able to arrive in time – as a result of flight disruptions caused by the storm passing through the Windward Islands – the vast majority of them did, and the displays they put on turned out to be a potpourri of cultural expressions.

From the tuk band from Barbados to the steel pan from Trinidad and Tobago, the music from the English, Dutch, Spanish and French-speaking Caribbean left the crowds enthralled.

LaRocque told the large gathering that CARIFESTA is a force that binds the Caribbean countries and defines them uniquely. He highlighted that CARIFESTA returned to Barbados for the second time since CARIFESTA Four in 1981.

“This year we celebrate 44 years as a Caribbean community and CARIFESTA happened from the beginning…CARIFESTA is a highly valued Caribbean event that is near and dear to our hearts since its inception in 1972 in Guyana…it has given us a platform where we can share and showcase our talents and assert our cultures and celebrate ourselves,” he explained.

The Secretary General highlighted that there is much store for the cultural sector including some US$2.6 million for establishing the Cultural Creative Industries Innovative Fund which will assist the public and private sectors in member states with seed funding for medium, small and micro enterprises in the sector. He added that this boost from the Caribbean Development Bank is just one of the great things for the culture sector.

Meanwhile, Minister Lashley used the opportunity to call on the contingents work even harder for regional integration. He urged the gathering to rededicate themselves to dreams of their forefathers to the dreams of united Caribbean politically, economically and socially.

Lashley noted that though CARIFESTA has had its challenges over the years but the vision never died.

“The tenacity of spirits exhibited by leaders in the cultural sphere, successive regional governance and the CARICOM secretariat together permitted CARIFESTA to survive a hiatus of 11 years and return stronger than ever in 1992,” he said.

Lashley stated a new strategic direction for CARIFESTA is being sought which is intended to position the festival as world renowned festival of Caribbean cultural and artistic excellence that brings economic benefits, unites the region and excites all people.

“This new strategy demands that we leverage the comparative advantage afforded us by our natural, cultural and human assets for economic development. Indeed, when we reflect on this it is these assets that have placed us on the world stage,” he said.

Even before the official opening ceremony yesterday, other CARIFESTA activities got underway the day before.

The Grand Market opened at the Lloyd Erskine Sandiford Centre, while the Youth Village at the Barbados Community College.