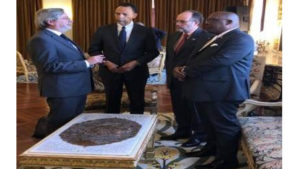 The third Ministerial Meeting begins here on Tuesday and Harris, who is the Prime Minister of St Kitts-Nevis, is being accompanied by CARICOM Secretary General Irwin LaRocque, Assistant Secretary-General for Foreign and Community Relations, Colin Granderson, as well as St Kitts- Nevis’ Permanent Representative to the Organization of American States (OAS), Dr Everson Hull.

The ICG is comprised of countries from the European Union and Latin America and the CARICOM delegation said that the discussions will focus on important next steps in regard to the ongoing political crisis in Venezuela.

Last weekend, CARICOM leaders at a special security summit in Trinidad and Tobago vowed to continue their diplomatic efforts aimed at finding a peaceful and lasting solution to the ongoing political crisis in Venezuela, where opposition forces are seeking to overthrow the government of President Nicolas Maduro.

“We will continue to be in contact with other interested parties to encourage efforts to bring a peaceful solution to the crisis,” the regional leaders said in a statement following their one-day special CARICOM summit on security.

The CARICOM leaders said that while they would continue to monitor the situation in the South American country, they remain “ convinced that the principles of non-interference and non-intervention in the affairs of states, respect for sovereignty, the constitutional framework, adherence to the rule of law and respect for human rights and democracy must be upheld”.

The leaders said that they have “noted with concern, the turn of events in the Bolivarian Republic of Venezuela and the potential they hold for the escalation of the political crisis and further violence to the detriment of the people of the country.

In March, Harris led a CARICOM delegation to Ecuador for discussions with the ICG with the group expressing “its willingness to increase contacts with regional and international partners in order to foster a common understanding and response to the situation in Venezuela.”

At least three people have been killed and several others injured in clashes between opposition and government supporters in Venezuela, since the Opposition Leader, Juan Guaidó, last week called on the military to support the move to remove President Nicolas Maduro from power.

But the army appears to be remaining loyal to Maduro and during the clashes amid rival demonstrations, they fired tear gas and water cannons to disperse the crowds.

In January, Guaidó declared himself Venezuela’s interim leader, and he has been recognised by more than 50 countries including the United States, the United Kingdom and most of Latin America.

But Maduro, who won re-election last year, is being backed by Russia, China and Cuba.