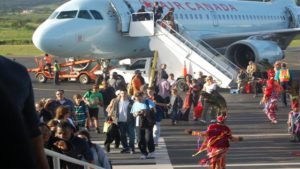 The Caribbean region experienced a strong rebound in international arrivals for the first quarter of 2019, recording approximately 9.1 million international tourist trips between January and March.

This increase is equivalent to 12% more trips when compared to the corresponding period of 2018.

According to the data provided by the Caribbean Tourism Organization (CTO) quarterly statistical review, estimates showed a growth rate of 13.5% in January; 12.8% in February; and 10% in March.

Coming off the unprecedented series of strong hurricanes which decimated the local tourism industries in several Caribbean destinations in September 2017, tourism business has gradually returned. Many of the destinations that were untouched registered record-breaking stop-over arrival levels.

With respect to tourist arrivals to the Caribbean in the first quarter, the United States remains one of the leading source markets with most destinations experiencing a rise in US residents taking Caribbean vacations.

The looming exit of Britain from the European Union, political tensions and social unrest in some other European countries have reduced consumer confidence, leading to a less encouraging performance in the European market.

An improving economy in Canada was reflected by an increase of 4% in Canadian visitors to the region.

Growth was recorded in all key performance areas for the accommodation sector for the region in the first quarter of 2019 with the overall average daily rate for the Caribbean increasing during by 8.8%. Hotel room occupancy in the region reached 72.8% during the first quarter of 2019 with St. Kitts and Nevis recording on of the largest occupancy growth of of 18.7% during this time.

Turning to the cruise sector, with all cruise facilities in the region opened for business, the CTO says cruise activity is again at an all-time high.

Based on reported data, Caribbean destinations received an estimated 10.7 million cruise visits in the first quarter of 2019. This record number of cruise visits was an increase of 9.9% when compared to the same period of 2018.

The performance of the cruise sector was however wide-ranging among the destinations, as some destinations recorded strong growth while others registered declines.

Demand for air travel to the Caribbean during the first quarter of 2019 increased in available seats by 1.2%.

However, according to OAG, an air travel intelligence company based in the UK, preliminary data indicates the top three regional carriers in terms of available seats Caribbean Airlines, Air Caraibes, and LIAT recorded overall declines in capacity of 30%. They also registered a 28.6% reduction in frequency. LIAT’s capacity decreased by 20.3% when compared to the first quarter of 2018.

The CTO says this early momentum in growth in stay over visitors and cruise passenger arrivals to the region is expected to remain healthy, however there are a number of risks looming over the industry, including the US and China trade war, the possibility of ‘hard’ Brexit, the expected hike in fuel prices due to increased geopolitical risk in some oil-producing regions like Venezuela and activity during the Atlantic hurricane season.