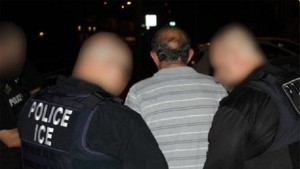 ICE OFFICERS MAKING ONE OF THE ARRESTS.

FLORIDA, United States, Friday October 9, 2015 – A Jamaican man who was convicted of murder is among several Caribbean immigrants who are now in custody after US Immigration and Customs Enforcement (ICE) made arrests across Florida over the past month, targeting individuals who “pose a threat to public safety”.

Highlighting some of the captured immigrants, ICE said officers from its Enforcement and Removal Operations (ERO) held a Jamaican in West Palm Beach who had been sentenced to 10 years deferred adjudication and placed on community supervision for a murder he pleaded guilty to.

There was also a Cuban man convicted of lewd and or lascivious act on a minor and sentenced to eight years of probation.

Both men are lawful US permanent residents but are awaiting deportation hearings before an immigration judge.

Overall, over a quarter of the immigrants arrested had criminal records that included felony convictions for serious or violent offences, such as murder, attempted murder, child sex crimes, sex offences, weapons charges and drug violations. Sixteen of them were previously deported but returned to the country.

“As this operation makes clear, ICE is committed to prioritizing convicted criminals and those who are public safety threats for apprehension and removal,” said Marc Moore, field office director for the Miami Field Office of ERO, which oversees all of Florida, Puerto Rico and the U.S. Virgin Islands.

“Our communities are safer today thanks to the hard work of our officers across the state.”

The arrests were made in 13 Florida counties.