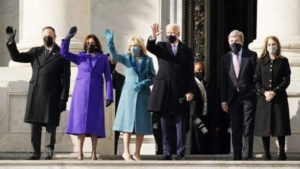 “From impeachment, to insurrection, to a historic day of inauguration, the last Administration has been nothing short of a tumultuous undertaking that has provoked division in ways America has never known,” Caribbean American Congresswoman Yvette D Clarke, the daughter of Jamaican immigrants, told the Caribbean Media Corporation (CMC) after Biden and Harris’s inauguration on the grounds of the Capitol in Washington.

“Our constitution’s safeguards have held firm and supported the peaceful transition of power from one administration to the next,” added Clarke, who represents the predominantly Caribbean 9th Congressional District in Brooklyn, New York. “Indeed, there is no tradition more crucial to our nation than this. The Biden-Harris administration historically included the first Black Caribbean-Indian American woman, Vice President Kamala Devi Harris. As a woman of Caribbean descent, the historic nature of this accomplishment cannot be understated.

“Being among the socially-distanced masses watching history being made, I was overcome with joy,” continued Clarke, a senior member of the US House of Representatives’ House Committees on Homeland Security, and Energy and Commerce, co-chair of the Smart Cities Caucus, and co-chair of the Multicultural Media Caucus, “My colleagues and I were filled with the optimism of building towards a united future and the possibility of continuing to legislate on behalf of not only our constituents but the American public as a whole and our global contributions.

“For many people of colour, immigrants, and other minority communities, these past four years have been difficult,” she said. “But today is not a day to dwell on the past. Today, we look forward with hope for this great nation and rejoice that the will of the people has prevailed.”

“It is a signal to every American, as well as (to) our allies abroad, that brighter days are ahead in the United States of America,” said Jeffries, chairman of the US House of Representatives’ Democratic Caucus. “In a time marked by chaos, crisis, confusion and corruption, President Joe Biden and his partner in the White House, Vice President Kamala Harris, will restore the values that we hold sacred as Americans.

Jeffries said House Democrats are “excited and looking forward to continuing our work with President Biden and Vice President Harris to ‘Build Back Better For The People’ and make life better for everyday Americans.

“Together, we will crush the virus, provide direct relief to everyday Americans who are struggling and supercharge our economy. so that we can create prosperity in every single zip code,” he said. “That’s what the American people want. That’s what they deserve, and that’s what the House Democratic Caucus is going to work to achieve.”

Veteran New York State Assemblyman Jamaican, Nick Perry said that “today, all Americans can once again take pride in the fact that they reside in the greatest democracy in the world, with leaders at the helm who will not bring shame upon us.

“Reasonable Americans have reclaimed our nation and have a president who will serve a power greater than himself,” said Perry, who represents the 58th Assembly District in Brooklyn.

“As a Caribbean-American, the day is even sweeter, as we witnessed history with Vice President Kamala Harris’ swearing-in,” he added. “I am sure most genuine, real Americans will join me in shouting loudly from our rooftops, ‘Oh, Happy Day.’”

Given the events of the past four years and the past two weeks in particular, New York City Public Advocate Jumaane Williams told CMC that “we cannot underestimate or overstate the importance of our institutions holding well enough to remove a tyrant (referring to outgoing President Donald J. Trump). New York State Assemblywoman Rodneyse Bichotte Hermelyn, the daughter of Haitian immigrants, said Wednesday marked an “historic day where we will embrace Joe Biden and Kamala Harris as our nation’s leaders.

“The inauguration allows us, at last, to turn the page on the dark years of Donald Trump’s presidency,” said Bichotte Hermelyn, who represents the primarily Caribbean 42nd Assembly District in Brooklyn. “We can all be proud that we prevailed through the recent attacks on our democracy.

“Although there are still rough days ahead, there’s much to look forward to,” added Bichotte Hermelyn, chair of the Brooklyn Democratic Party. “We replaced the divisive, hateful, racist policies of the Trump administration with a beacon of light to guide us forward.