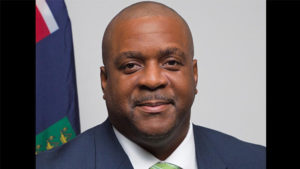 According to the charges filed in the United States District Court, Southern District of Florida, Fahie, Pickering-Maynard and her son Kadeem Maynard, have been charged with conspiracy to import a controlled substance and money laundering.

The 19-page indictment alleges that as far back as October 16, 2021, a United States Drug Enforcement Agency (DEA) confidential source had several meetings with a group of self-proclaimed Lebanese Hezbollah operatives who stated they had business ties to South Florida and the Middle East.

The indictment alleges that those meetings occurred in Tortola and that during the course of these Meetings, assistance was sought to facilitate the Lebanese group’s use of the British Overseas territory as a “temporary storage point for drugs (cocaine) transported from Colombia via boat and destined for the United States.

‘Those efforts would also include the subsequent laundering of the drug proceeds,” the indictment alleged, adding that the Lebanese group agreed to assist by “facilitating introduction for senior members of the BVI government who would offer protection…but would require payment for their assistance”.

The DEA said 51-year-old Fahie had agreed to allow an informant, who was posing as a member of Mexico’s Sinaloa drug cartel and whose identity remains confidential, to use the British Virgin Islands’ ports to ship cocaine in return for a payment of $500,000. He also asked for additional money to repay a debt to a “fixer”.

In his broadcast, Wheatley said he has met with the Governor John Rankin, who alerted him of the developments in the United States.

“Cabinet as a body met earlier this evening, where we discussed the situation. I will also discuss the current circumstances with the UK Minister for the Overseas Territories, the Rt Hon Amanda M Milling MP tomorrow (Friday) morning, along with the Governor and the Attorney General,” Wheatley said.

He told the nation that while he cannot comment further on the arrest since it is an active investigation, the Commission of Inquiry – that had been examining allegations of corruption and abuse of office by elected and statutory officials – would be published sooner given the new development.

However, he maintained that the report is not connected to the Premier’s arrest in the United States.

On Thursday, Britain’s Foreign Secretary, Liz M Truss, had said that the arrest of Premier Fahie has shown the importance of the UK-sponsored Commission of Inquiry in the territory, despite the Governor saying the two were not connected.

Wheatley urged the public to read the report objectively and not in the context of the arrest, with the aim of strengthening systems of government under a democratic framework as opposed to draconian measures that would set the BVI back.

Acting Prime Minister Wheatley maintained that the BVI remains committed to good governance and that he would be updating the island in due course.