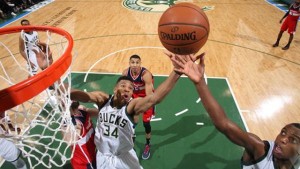 A matchup problem as a 6-foot-8 forward who plays in the backcourt, Middleton did more damage Thursday night against the Washington Wizards by attacking the bucket and finding open teammates.

Middleton scored 27 points, Giannis Antetokounmpo had 17 points and 13 rebounds, and the Bucks held on for 99-92 win to head into the All-Star break on a high note.

”Yeah, we look at Khris as our best player, our best scorer,” teammate Jabari Parker said. ”He opens up a lot of areas for us, and we’re going to depend on him.”

Especially in the final quarter, when Middleton had 14 points and five assists.

He’s not just a catch-and-shoot player anymore. Expectation rose in the offseason when Middleton signed a five-year contract worth $70 million.

Against Washington, Middleton was 1 of 3 from 3-point range, but 9 of 17 overall. Middleton also tied a season high with nine assists.

”Sometimes, you want to put guys in position (for more responsibility), you want to see if they grab it – and he’s grabbing it,” coach Jason Kidd said.

Bradley Beal scored 19 points for the Wizards, and John Wall had 15 points and 10 assists.

Washington got within three when Wall made two free throws with 1:36 left.

But Middleton answered again, hitting a jumper in the lane on the next possession before setting up a drive-and-dish to Greg Monroe that gave the Bucks a 97-90 lead with 15 seconds left.

”He was being aggressive,” Wall said. ”When a guy gets in a rhythm, it’s kind of hard to stop. He’s always been a person that’s scored well against us.”

Washington’s star guard played with a sore right knee after he said he collided with Milwaukee’s O.J. Mayo in the first quarter. Wall said he would get treatment for the All-Star game this weekend and will play ”unless he can’t move.”

The Wizards go into the All-Star break 3-7 in their last 10 games.

The Bucks will take a modest but badly-needed two-game winning streak into the break. At 22-32, Milwaukee needs to inch back closer to .500 before it can start thinking about making a run at a second straight playoff appearance.

Sparked by better defense, the Wizards rallied from an 11-point deficit late in the second quarter to turn it into a tight contest after halftime.

Milwaukee used a 25-5 surge in an eight-minute span to help build a 55-44 lead with 45 seconds left in the second quarter. Jabari Parker scored 12 points during that quarter, when the Bucks made their run using primarily a three-guard lineup that attacked with the ball.

”I was just sitting here trying to contemplate on what actually happened, like how did we lose the game?” Beal said. ”I feel like we came out aggressively, came out and played the right way in the first and third quarters, and I guess the second and fourth they made bigger plays than we did.”

A 58-38 rebounding advantage for the Bucks hurt the Wizards, as did Washington’s 6-of-32 night from the 3-point line.

”We didn’t attack,” coach Randy Wittman said. ”Bradley did the last couple of minutes and he got to the rim. We didn’t do enough of that in the fourth quarter.”

Parker finished with 17 points and shot 7 of 11 from the field, playing a season-high 41 minutes. He’s showing no ill effects from the left knee injury that sidelined him in December of his rookie season in 2014-15.

Washington: Wall had his 30th double-double of the season. … The Wizards went 0 of 10 from the field with three turnovers during the Bucks’ second-quarter run.

Milwaukee: Bucks co-owner Marc Lasry is taking part in the All-Star celebrity game Friday in Toronto. Asked before the game if the boss was ready, Kidd said with a straight face: ”That’s a very good question. We’ll see if he needs the asthma inhaler.” … O.J. Mayo was assessed a flagrant foul after Washington’s Otto Porter Jr. fell hard to the floor on a layup attempt with 10 minutes left in the third quarter.