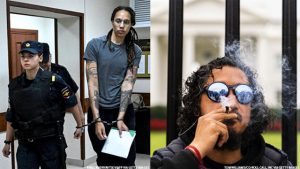 “Just as it’s unacceptable for Americans to sit behind bars for simple possession of cannabis, it’s absolutely unacceptable for an American sitting in a Russian gulag.” So said DC Marijuana Justice co-founder and cannabis activist, Adam Eidinger, to The Washington Post.

So on October 26, when WNBA star Brittney Griner lost her appeal and, despite hope for a reduction in her punishment, a Russian court upheld her nine-year prison sentence for drug smuggling charges, the same advocacy group and her supporters decided to hold a “smoke out” in protest.

The demonstration kicked off at 4:20 local time on Thursday outside the country’s embassy, and the group told demonstrators, “If you have used vape cartridges, bring them!”

Griner, who was arrested February 17 at the Sheremetyevo International Airport near Moscow, had 0.702 grams of cannabis oil in vape cartridges in her luggage.

“I had no intention to break the law,” Griner said during her initial testimony. She then added that it was an accident due to stress and rushing while packing, while also recovering from a then-recent COVID-19 diagnosis.

During the demonstration, protesters not only smoked marijuana, they also carried a 51-foot inflatable joint. One side read “Free 420 Prisoners.” This is a reference to President Biden’s federal pardon for simple marijuana possession, which many see as a hollow act, since most convictions happen on the state and not the federal level.

The other side read “Free Brittney Griner and the Russians from Putin” in Russian.

Given that, as The Post has noted, the higher courts in Russia are not known for overturning verdicts, it remains uncertain as to whether or not Griner’s legal team will continue to appeal or a prisoner swap between the U.S. and Russia will occur.