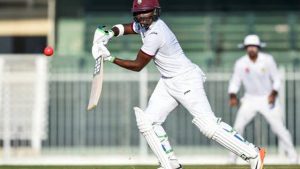 West Indies batsman Darren Bravo plays a shot on the third and final day of the tour match against Pakistan Cricket Board Patron’s XI at the Sharjah Cricket Stadium in the United Arab Emirates, yesterday.

SHARJAH, United Arab Emirates (AFP) — Darren Bravo hit a brilliant 91 as the West Indies drew a three-day tour game against a Pakistan Cricket Board Patron’s XI yesterday, in a timely innings ahead of this week’s day/night Test, the first in Asia.

The 27-year-old from Trinidad smashed 12 boundaries and three sixes to anchor West Indies’ 297 all out on the final day of the day/night match being played with a pink ball at Sharjah stadium.

The PCB Patron’s XI, who had scored 308 in their first knock, were 26-3 when the match finished.

Mohammad Hafeez (nine), Ahmed Shehzad (four) and Shan Masood (nine) all failed to press their claims for a return to the Pakistan team for the first pink ball Test which starts in Dubai from Thursday.

Hope hit six boundaries in his resolute knock before he became one of leg-spinner Shahzaib Khan’s five wickets. Shahzaib finished with 5-85.

The second Test will be in Abu Dhabi October 21-25 and the third in Sharjah October 30-November 3.