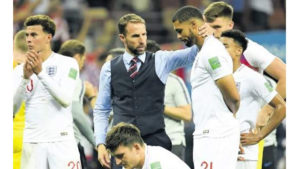 Croatia reached the World Cup final for the first time in its history yesterday, sparking scenes of joy in Moscow and in Zagreb after Mario Mandzukic’s extra-time winner prolonged England’s decades of pain to set up a decider against France.

“It hurts, it hurts a lot. It’s going to hurt for a while of course. We can hold our heads up high. It’s been a fantastic journey. We got further than anyone else could thought we would have,” added Kane after the tense semi-final match at the Luzhniki Stadium in Moscow.